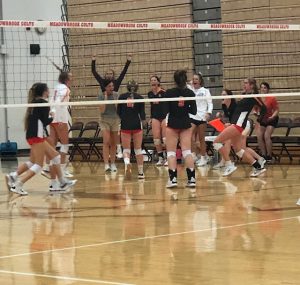 In a rematch of last year’s OHSAA Division II Regional Semifinal contest, the Meadowbrook Lady Colts turned the tables on visiting Sheridan and picked up a big MVL win, defeating the Lady Generals in four sets – 25-18, 25-23, 21-25, 26-24, on Thursday.

The victory boosts Coach Kelly Zehnder’s squad to 3-0 overall and 2-0 in the MVL.

Set two was again nip-and-tuck most of the way, deadlocked at 19-all before Sheridan closed with a 6-2 flurry for a 25-21 win to even the match. 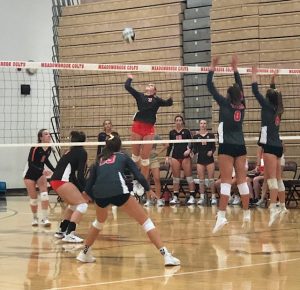 Meadowbrook pounded 60 kills in the match, with junior Cami Black again the catalyst with a whopping 24 stops. Juniors Megan DeVillez and Kendyl Cannon and sophomore Taylor Sichina were also strong up front with 14, 10 and nine kills, respectively. Junior Ella Jefferis set things up with 50 assists and she also recorded three service aces.

Defensively, junior Mylee Arnold was credited with 18 digs while also in double digits were Black with 16, Jefferis with 14 and freshman Addy Wiggins with 11.

The Lady Colts played both matches without sophomore outside hitter Karly Launder.

Meadowbrook hosts New Lexington on Tuesday and travels to Coshocton on Thursday, with JV action at 5:30 p.m. both nights.

The Meadowbrook Colts had plenty of success through the air, but couldn’t contain the running game of host Mogadore as the Wildcats scored a 42-34 victory on Friday.

Coach Steve Norman’s squad, now 1-1, was originally scheduled to play at Barnesville but the Shamrocks were forced to cancel due to COVID-19 issues.

Meadowbrook put the first points on the board thanks to a 22-yard TD pass from quarterback Josh Hupp to Damen Launder. The Colts’ two-point conversion try was stopped short, but MHS was on top, 6-0.

Mogadore countered with a two-yard TD run by William and the point-after kick by Gavin Schrock had the hosts in front, 7-6, at the end of one quarter.

Each team scored twice in the second period, Meadowbrook’s coming on a one-yard TD run by Hupp and a 52-yard TD pass connection from Hupp to Kahle Flowers while Mogadore’s points on a three-yard TD run by Knight and six-yard TD pass by QB Zeke Cameron to Mason Williams.

Hupp and Kahle also teamed up on a two-point conversion pass following the second score, leaving the Colts trailing, 21-20, at the intermission.

Mogadore opened a 28-21 lead late in the third chapter with a four-yard TD by Collin Lenher followed by another Schrock PAT.

The Colts cut the deficit to two on a three-yard TD run by Hupp, but the two-point conversion failed leaving the visitors down by 28-26.

The ‘Cats got a scoring runs of 56 by Butler and seven yards by Austin Constantine followed by extra-point kicks from Schrock, to extend the lead to 42-26 but Meadowbrook stayed alive thanks to an 88-yard TD pass from Hupp to Flowers, with a Hupp-to-Launder two-point passing making the score 42-34.

The Colts attempted an on-side kickoff but Mogadore recovered, but the Wildcats had to punt giving Meadowbrook one final shot to get even.

The Colts gained one first down, but four straight incomplete passes followed and Mogadore ran out the clock.

Hupp completed 19-of-33 passes, with Launder catching six balls for 116 yards; Flowers landing five for 169 stripes and Brady McManaway – who also sparkled on defense with 14 total tackles – also catching five for 61 yards. Sam Bopp rushed four times for 28 yards and Hupp had a net of 22 yards on nine attempts.

Mogadore’s Cameron was 5-of-10 passing and the tandem of Tyler Knight and Mason Williams did most of the ground damage, with Butler gaining 223 yards on 22 attempts.

Mogadore led in first downs, 21-18; and had five penalties for 55 yards while the Colts were flagged eight times for 86 yards.

The Colts play Guernsey County rival Cambridge at Eugene Capers Field in Byesville on Friday, with kickoff at 7 p.m.

The teams did not play last year as Meadowbrook transitioned into the Muskingum Valley League, but the rivalry resumes with Cambridge leading the all-time series 35-11 although the Colts have won the last three meetings.

The Meadowbrook High golf team came out on top in a triangular match at the Cadiz Country Club on Monday.

Meadowbrook’s varsity plays Philo and Sheridan in an MVL match Tuesday at Fuller’s Fairways; take on New Lexington and Coshocton in MVL play Wednesday at Perry Country Club and take part in the Dover Tornado Invitational on Saturday at Oak Shadows Golf Club.

The MHS hosts a the Colts JV Invitational on Monday at the Cambridge Country Club.