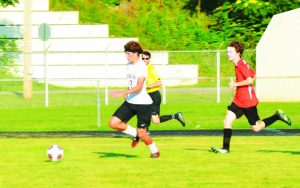 The Caldwell High soccer team traveled to Belpre on Tuesday, returning home with a season-opening 6-5 victory.

Caldwell’s head coach Mike Ontko was pleased with his team effort in the opening win.

“That was a good win,” he stated. “We had never beaten Belpre before.

“The heat was definitely wearing us dow,” Ontko continued, “It is the first time in a while that we have multiple threats on offense. Putting up six goals and winning the first game is something to be proud of. We did a good job of possessing the ball. We were the better team today. Our defensive mistakes let them back in the game, but we kept our composure and scored goals.”

The Eagles jumped out to an early lead when Nick Diaz scored a goal with 33:43 left in the first half.

Caldwell freshman Carter Wheeldin headed the ball into the net off a Zac Frame assist just over a minute later to tie the game at 1-1.

Belpre took the lead again with 22:01 remaining in the half when Jacob Maze scored, but the Redskins quickly tied the game at 2-2 when freshman Jonas Copley kicked a rebound of a Frame shot into the goal.

Frame tallied a goal a couple minutes later to give Caldwell the lead at 3-2, but Belpre’s Diaz got his second goal of the half with 11:49 left to finish the scoring for the half and leave things tied at 3-3.

Frame gave the Redskins lead in the second half, scoring two goals in the first 20 minutes of the half for a 5-3 advantage.

Belpre’s Caleb Breedlove cut into the Caldwell lead with a goal with 17:59 left in the game. Wheeldin scored his second goal of the game with 16:13 left in the half and the Eagles’ Maze scored with 5:37 left to complete the scoring.

The ‘Skins traveled to Zanesville on Thursday, with Bishop Rosecrans claiming a 6-1 win.

“It seemed the heat affected us right off the bat.” Coach Ontko stated. “Letting in the early goals hurts you mentally, and we couldn’t stay healthy today. This young team will learn from this and will get better.”

Rosecrans jumped out to an early lead, scoring all six goals early in the first half before the Caldwell defense stepped up and held them scoreless the remainder of the game. Grady Libishak scored four goals and Garret Pugh had two for the Bishops.

Caldwell’s lone goal was scored by Frame. Goalkeeper Mac Clark had seven saves on the evening.

The Redskins (1-1) travel to Wood County Christian on Tuesday and will have their home opener on Thursday vs. Harrison Central.