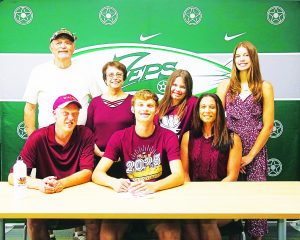 Shenandoah High All-Ohioan Max McVicker, flanked by his parents RJ and Maureen McVicker, will continue his academic and athletic careers at Walsh University where he will be a member of the track team. Also on hand were his grandparents, Herman and Ronnie Gray, and his sisters Sophia and Emmy McVicker.

Max McVicker – a two-event All-Ohioan this past spring – will continue to jump over hurdles at the next level after announcing he will attend Walsh University where he will be a member of the Cavaliers’ track team in the spring.

McVicker etched his name in Shenandoah sports lore by placing in both hurdle events at the OHSAA Division III Track and Field Championships – taking the runner-up spot in the 300-meter hurdles (40.06) and placing eighth in the 110-meter hurdles (16.06).

“I am happy to say that I chose Walsh because going there will give me the best opportunity to become successful in track and also in my future career as a nurse,” he said. “Their campus was gorgeous and the amazing teachers and fellow students that I met at orientation really made the decision to attend Walsh University a whole lot easier.”

The Zep standout says he’s ready to tackle the challenge of college athletics.

“My expectations are pretty high for myself in track,” he said. “It will be very tough, but I know I am capable of doing amazing things.”

“Max is a great kid, and I am excited for him to be able to continue his track career at the collegiate level,” said Slevin. “His work ethic is superb, frequently training diligently during and outside of scheduled practices.

“I believe he will have continued success at the college level given his athletic, as well as outstanding academic and social, abilities,” she added. “With collegiate-level training, he is bound to excel.”

McVicker was named the Eastern District Division III Co-Track Athlete of the Year, earning all-district honors in the 300 hurdles, 110 hurdles and 200 meters.

McVicker was also a key member of the Zeps’s basketball team last winter. He averaged 12.2 points per game as Shenandoah posted an overall record of 21-4, capturing the OHSAA Division IV Sectional championship to reach the D-IV District semifinals and finishing second in the OVAC Class 2A standings.