In a game that featured the second-most combined points in the history of the “Guernsey County Super Bowl”, Meadowbrook held on for a thrilling 48-46 victory over Cambridge at Eugene Capers Field in Byesville on Friday.

The win was the fourth straight in the series for Meadowbrook, but Cambridge still leads the all-time series 35-12.

The Bobcats broke on top at the 9:55 mark of the first quarter, scoring on a 28-yard pass from junior QB Caden Moore to senior tight end Levin Polasky. Lucas Parsons added the point-after kick to put Cambridge on top, 7-0.

A big play by the Cambridge defense set up the next score, with junior Caleb Hewison returning a pass interception 71 yards to the Meadowbrook five-yard line.

Sophomore back Easton Jones scored on the next snap on a run up the middle, with Parsons again nailing the PAT boot for a 14-0 Bobcat lead with 6:54 remaining in the opening period.

The Bobcats’ lead increased to 21-0 thanks to another big play by the “D”, this time a scoop-and-score fumble return by junior defensive back Jake Valentine which covered 49 yards to paydirt. Another Parsons extra-point kick followed, putting the visitors up three scored with 5:05 left in round one.

Meadowbrook finally got on the scoreboard at the 5:50 mark of the second quarter, with QB Josh Hupp teaming up with Damen Launder on a fourth-and-goal at the nine-yard line for “six”. The two-point conversion failed, but the Colts had pared the gap to 21-6.

The Colts scored again at the 1:4 mark of the second period, with Hupp and senior Kahle Flowers combining on an 81-yard TD strike. The two-point pass failed, but Meadowbrook was within 21-12 with 1:47 remaining in the first half. 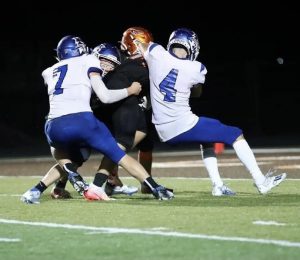 Cambridge quickly retaliated, with junior Davion Jeffrey racing 86 yards to the “house” with the ensuing kickoff. The PAT kick failed this time, but the ‘Cats led 27-12 at the 1:31 mark of round two.

Hupp connected with senior Brady McManaway on a 35-yard TD pass at the 1:04 mark, with the score set up by a 34-yard completion from Hupp to senior Hunter Eubanks. The PAT kick failed, but the Colts had climbed within 27-18 at the intermission.

Meadowbrook got ever closer at the outset of the second half, with senior Romeo Dorsey returning the kickoff 88 yards for a TD. The PAT run was stopped, but the Colts were within three, 30-24, with 11:46 left in the third quarter.

The Colts took their first lead of the night on the next possession, with Hupp setting things up with a 30-yard run and then scoring from a yard out. A mishandled snap foiled the point-after try, but MHS was on top, 30-27, with 7:50 remaining in the chapter three.

Cambridge answered with a five-minute drive to regain the lead, with Moore running in from six yards out for the score and Parsons booting the PAT to put the ‘Cats back in front, 34-30, with 2:58 on the third quarter clock.

Another lead change followed, with Hupp again finding Launder – this time for a 31-yard TD – at the 1:39 mark of the third quarter. The two-point pass was incomplete, but the Colts regained the upperhand, 36-34.

A 34-yard Moore-to-Jeffrey connection set up Cambridge’s next tally – a three-yard TD run by Jones. The two-point pass failed, leaving Cambridge on top by four, 40-36, with 10:43 remaining.

It was Meadowbrook’s turn, and a couple of electric plays put the ball in the end zone. Hupp teamed with McManaway on a 40-yard gainer and then found Flowers, who would not be denied as he powered through Cambridge defenders for the final 10 yards of a 34-yard TD. The Colts again came up empty on the extra-point try, but they led, 42-40, with 9:32 to play.

Flowers bloomed again, but this time defensively with a 63-yard “pick six” with 8:26 to go. The two-point run came up just short, but the Colts’ lead was now eight, 48-40.

Cambridge pushed the ball downfield and scored on a Moore-to-Jeffrey TD toss covering 38 yards, but Meadowbrook’s McManaway broke through on a blitz to stymie the two-point conversion and keep the Colts in front, 48-46, with 3:33 remaining and Meadowbrook was able to run out the clock to earn the prized victory.

“They had a lot of momentum early but our kids responded,” said first-year MHS coach Steve Norman. “We just kept plugging away and once we got rolling, we were able to hold on at the end.

“Kahle had some huge momentum-shifting plays that really impacted our team’s performance,” Norman stated. “It’s always nice to get a win because they are tough to come by each Friday night, but we also recognize that we have a lot of improving to do.”

Meadowbrook finished with a 475-307 edge in total yards.

The Colts host MVL foe Crooksville on Friday at 7 p.m.

Defensively, Black was charted with 20 digs while Mylee Arnold and Mila Norman both had seven and Jefferis had six.

Black again supplied the most power at the net for MHS (5-0, 4-0 MVL) with 24 kills, with Kendyl Cannon contributing 10 and DeVillez adding nine followed by Jefferis with six and Taylor Sichina with five. Jefferis again set things up offensively with 43 assists and she led in service aces with three.

It was Black also leading the defense with 24 digs while also in double digits were Arnold with 15 while Jefferis and Cannon had 10 apiece.

It was a busy week for the Meadowbrook High golf team, with Coach Mel Pesuit’s squad taking the top spot in one Muskingum Valley League triangular match and finishing second in the other; finishing third in a home match at Salt Fork State Park Golf Course and competing in the Dover Invitational

Meadowbrook finished second at Fuller’s Fairways in Zanesville on Tuesday. Sheridan prevailed with a 162-stroke total; Meadowbrook was the runner-up with 170 and Philo was third at 172.

On Wednesday, the Colts prevailed at the Perry Country Club in New Lexington. Meadowbrook posted a 183 score followed by New Lex (199) and Coshocton (248).

In the home triangular match at Salt Fork on Friday, Carrollton came out on top with 163; Fort Frye was second at 192 and Meadowbrook was third at 198.

Carrollton’s Jaxon Rinkes was medalist with a three-over par 38.

In JV action, Buckeye Trail won a tri-match with 231; Meadowbrook was second with 285 and Fort Frye third with 297.

At the Dover Invitational, the Colts were 13th in the 17-team field with 383 points. Hiland picked up the team title with a 310-stroke total while Uniontown Lake was second at 317.

Chase Bokker of Upper Arlington was the medalist with a 79. 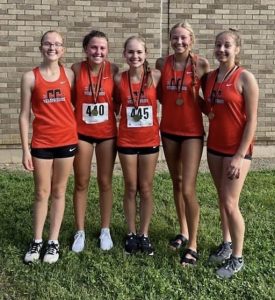 The Meadowbrook girls finished third and the boys were sixth in the big school division of the Newcomerstown Cross Country Invitational on Saturday.

John Glenn won both big school team titles and the individual winners were Chris Tooms of John Glenn for the boys (15:45) and Ava Gebczyk of Marietta for the girls (20:26).

The Colts compete in the 50th Dover Cross Country Invitational on Saturday.