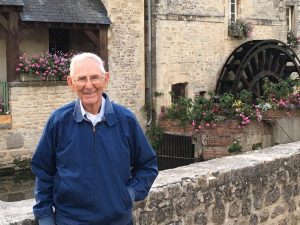 Schockling Roger Jude Schockling of Jacksonville, FL, 85, died at Baptist South Hospice on September 8, 2021. He was born on January 21, 1936 in Caldwell, Ohio to the late Ignatz R. Schockling and Gertrude Schwallie Schockling. Roger graduated in 1954 from Caldwell High School and graduated from Ohio University with a BSEE in Electrical Engineering in 1960. He married his loving wife of 49 years, Karen Ann Snider Schockling, on January 13, 1962 at Christ the King Catholic Church in Columbus, Ohio. Roger is survived by his sons Daniel (Tina) of Houston, TX, and Philip (Jami); grandchildren Matthew and Laura of Chatham, NJ.  He is also survived by his brother, Clair Schockling (Janet) of Caldwell, Ohio. He is preceded in death by his eldest son, David, wife Karen, and brothers and sisters, James, Virgil, Patty, Geneva, and Phyllis. Roger was a member of St. Joseph’s Catholic Church, where he was a member of the Choir, the Young at Heart group, and served as religion tutor for grade-school children. To pay for college, Roger joined the U.S. Army, where he served as a paratrooper in the 82nd and 101st Airborne Divisions and was stationed in Japan. Upon college graduation, Roger began his career as a design engineer for North American Rockwell, where he designed landing systems for aircraft carrier-based, U.S. Navy aircraft. Later in his career, he worked for the U.S. Civil Service at NAS Jacksonville, where he managed the repair and maintenance of aircraft for the U.S. Navy.  Roger was an extremely hard worker, and for most of his adult life he owned a side business so he could provide extra for his family. Roger grew up on a farm, and some might say he was a farmer at heart. South of Jacksonville, he owned a farm where he bailed hay for horse and cattle owners and he was part-owner of 150 cattle. Visitation will be held on Wednesday, September 15 from 6:00 to 8:00 p.m. at St. Joseph’s Catholic Church in the Marian Chapel. Mass of Christian Burial will be celebrated at 10:00 am on Thursday, September 16 in St. Joseph’s Catholic Church (Main Church), 11757 Old Saint Augustine Rd., Jacksonville, FL, 32258 with Father Anthony Bonela as Celebrant. Interment will follow in the St. Joseph’s Catholic Church Cemetery, with a luncheon in the Cody Center thereafter.

In lieu of flowers please make a donation to St. Joseph’s Catholic School.

May the souls of all the faithfully departed, through the mercy of God, rest in peace, Amen.