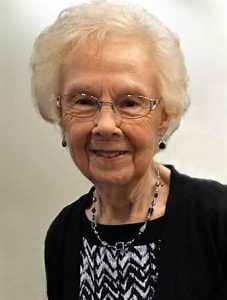 Joann C. Zwick age 89, of Caldwell, Ohio passed away Wednesday, September 15, 2021 at her home surrounded by her loving family. She was born July 6, 1932 near East Union, Ohio, a daughter of the late Elijah F. and Cecelia Schockling Crum.

She was a 1950 graduate of the Summerfield High School. She married Charles E. Zwick on June 14, 1952. Following their marriage, they moved to Santa Ana, CA for 18 months while Charles served in the United States Marine Corps. She along with her husband raised their family in the St. Michael Catholic Church in Carlisle and after moving to Caldwell became a member of St. Stephen Catholic Church in Caldwell. She was active in the Catholic Women’s Club. She enjoyed cooking and baking and will be remembered for all the pies and noodles she made with love for her family. She enjoyed quilting but was most fulfilled when she was spending time with her family.

Due to current COVID conditions, the family will observe a private visitation and private Mass of Christian Burial held Monday, September 20, 2021 at 11:00 a.m. at St. Stephen Catholic Church in Caldwell, with Rev. Father Wayne Morris and Rev. Father Walter Heinz serving as concelebrants. The public is invited to view the Mass on the St. Stephen Catholic Church Facebook page and attend the public graveside service that will be held following the mass at approximately 12:45 p.m. at the St. Michael Catholic Cemetery in Carlisle. Please join us in remembering Joann by visiting her memorial at www.ChandlerFuneralHome.net.

Eternal rest grant unto her, O Lord, and let the perpetual light shine upon her. May the souls of all the faithful departed, through the mercy of God, rest in peace. Amen.