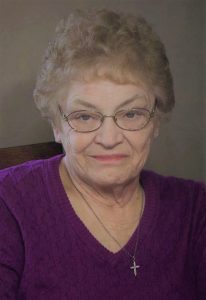 Marilyn J. Williams Whetstone Pangle, age 75, of Summerfield, Ohio, died Monday, September 13, 2021, at Marietta Memorial Hospital. She was born September 25, 1945, in Guernsey County, Ohio, daughter of the late John and Sina Abrams Williams. Marilyn was a homemaker, but for many years she worked for factories and hotels in Cambridge. She was a member of the First Church of Christ in Caldwell, where she enjoyed helping with funeral dinners, served as a greeter, and was a singer with the program Sing-A-Long at Summit Acres. Marilyn was a devoted Christian lady who was dedicated to her family.

In addition to her parents, she is preceded in death by her first husband, Ralph F. Whetstone, Sr., who died August 12, 2000; a granddaughter, Carissa Saling, and a grandson, Donald Levi Saling; two children, Tamela Annette Varhola and Richard V. Pangle; one brother, Donald Williams; and a sister-in-law, Janice Williams.

Friends may call Thursday, September 16, 2021, from 5-8 p.m. at McVay-Perkins Funeral Home, 416 East Street, Caldwell. The funeral service will be observed Friday at 1p.m. at the First Church of Christ, 601 North Street, Caldwell, with Pastor Brent DeWees officiating. Burial will follow at Harmony Christian Cemetery. Due to current Covid conditions, guests are asked to follow safety guidelines at all gatherings. An online guestbook may be signed at www.mcvay-perkins.com.