Eclipsed only by her love for family, Kelly Zehnder has passion unmatched for the sport of volleyball as well as her alma mater.

Zehnder, who already had her name etched in the Meadowbrook High record book for most career coaching victories, hit a milestone with win No. 200 as the unbeaten Lady Colts rolled to a three-set sweep of Crooksville on Tuesday.

“I’ve had excellent families behind the players who support them in their endeavors to play volleyball,” said Zehnder, who now sports a 12-year coaching record of 200-82. “They’ve raised really great girls and that makes it easy to coach them.” 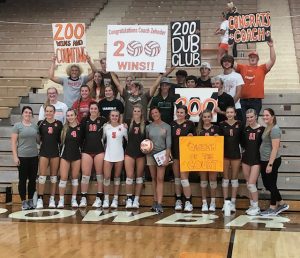 “I coach them really hard,” she admitted, not only of her current 8-0 squad but each of the previous teams, “but they’re already hard-working and tough and gritty.

“I’ve always tried to give them pride in themselves and all the important things they’re going to be faced with in life,” Zehnder continued. “I just think you need to give back when you can and people around here need things to believe in and I try to do that.”

Her impact could be felt in the post-game celebration honoring “Coach Z” with a large number of former players joining the current squad, countless family members and many friends on hand to congratulate the “Queen of Byesville”:

Zehnder-coached Lady Colts’ volleyball teams have won 10 league titles and two OHSAA District crowns during her tenure, and that doesn’t count a 16-victory, OVAC championship season credited to interim coach Jill Beskid when she stepped aside to have a child during the 2011-12 season.

Unknowingly, she had already passed her high school coach – Mike Rawlings – who had 173 victories during his 13-year run with the Lady Colts. 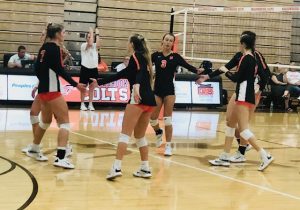 Rawlings was among those reaching out to congratulate Zehnder (Kelly Singleton during her playing days).

“I’m so happy for her,” said Rawlings. “Kelly has done a a great job and it makes me happy to see one of my players have success as the varsity coach.

“Some of my other players – Tiffany Capers Booth and Jennie West Schultice – are coaching as well and one of the best things as a coach is to see your former players still have a love for the game and still playing or coaching.”

Cami Black pounded nine kills while Kendyl Cannon and Megan DeVilles each had seven. Ella Jefferis directed the attack with 26 assists while Karly Launder and Taylor Sichina each had three aces.

Defensively, Black recorded 14 digs; Launder and Mylee Arnold each had seven; and Sichina and Mila Norman both had five.

Meadowbrook got 12 kills from Black; four from Launder and three from DeVilles while Jefferis was charted with 25 assists and four aces.

Launder collected 14 digs followed by Black with nine; Norman with seven; and Jefferis and Arnold with six apiece.

Cannon and Black led in kills with 14 and 12, respectively, while Launder had six. Jefferis was charted with 32 assists and Launder recorded four service aces.

Black and Launder both had 14 digs; Norman had seven and Jefferis and Sichina each had five.

MHS hosts River View on Tuesday and visits Maysville on Thursday, with JV action starting at 5:30 p.m. both nights.

The Meadowbrook Colts reached the mid-point of the season with a 4-1 record thanks to a 42-34 victory over visiting River View at Eugene Capers Field on Friday.

Coach Steve Norman’s squad, whose only blemish was a Week 2 road loss to Mogadore, improved to 4-1 while River View’s record dropped to 2-3.

River View scored first on a three-yard TD run, but Meadowbrook evened the score at 6-6 on a five-yard TD pass from QB Josh Hupp to Trevon Mayle.

The scoring picked up in the second quarter, with the Black Bears gaining a 16-14 edge to take a 22-20 halftime lead.

Hupp putt the Colts on top first with a one-yard TD run, with Cam Morrison adding the PAT kick for a 13-6 MHS lead.

River View made it 14-13 with a 35-yard TD pass on a fourth-and-12, with the two-point conversion run putting the visitors on top.

Meadowbrook regained the lead on an 11-yard TD run by Kaden Casey, with Morrison’s extra-point resulting in a 20-14 lead, but scored late on a seven-yard TD pass and converted the two-pointer to go up, 22-20, at the intermission.

The Black Bears built their lead to 28-20 early in the third period with a four-yard TD run, but the try for two was stopped short.

The Colts got even at 28-28 when Casey scored on a 15-yard run and then he scored the two-point conversion to deadlock the issue.

A one-yard TD run by Hupp put the hosts in front, but the two-point try failed leaving MHS on top, 34-28, and a 42-yard TD scamper by Hupp plus a two-point pass from Damen Launder to Tye Griffith built the lead to 42-28.

River View got within a score on a four-yard TD run, but the two-point pass was incomplete leaving Meadowbrook on top, 42-34, and three first downs enabled the hosts to run out the clock.

Meadowbrook finished with 536 yards of offense, including 378 rushing and 148 passing.

Hupp and Casey shared the running load, with Hupp gaining 165 yards on 18 carries with four TDs while Casey had 147 on 16 attempts with two scores. Sam Bopp chipped in 67 yards on seven rushes.

Hupp was 10-of-19 passing with one TD and one interception. Hunter Eubanks caught four passes for 42 yards and Ben McManaway had four receptions for 55 yards.

The Colts visit neighboring John Glenn on Friday, with kickoff in New Concord slated at 7 p.m.

Thanks to a sixth-man tiebreaker, the Meadowbrook Colts defeated Tri-Valley in a dual match at Salt Fork State Park Golf Course on Tuesday.

Both teams finished with 205 strokes, but Coach Mel Pesuit’s Colts prevailed as Easton Eibel’s sixth man score of 64 was better than Tri-Valley’s 66.

The Colts dropped a 160-183 decision to Maysville in a Muskingum Valley League dual match at EagleSticks Golf Course in Zanesville on Thursday.

Elgringham and Baier paced Meadowbrook with 86s; Coss shot 91; Dennis carded 99 and Eibel had a 105.

Hilant’s Carter Mishler was the overall medalist with a 69.

Utica’s Jay Figgins was the boys’ individual winner in 17:14.

Meadowbrook competes in the Sandy Valley Invitational on Saturday starting at 9 a.m.