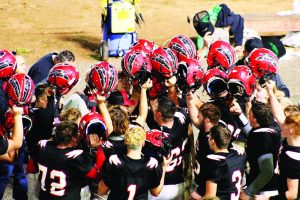 Caldwell High hosted Conotton Valley on Friday for its 2021 Homecoming Game, with the Redskins earning a 21-16 victory over the Rockets.

“Got to love it, homecoming is always a great atmosphere,” said Caldwell Coach Chance Rucker. “Our boys just stepped up we persevered. We made a couple great defensive stops towards the end that sealed the win for us.

“Defensively we stepped it up, allowed only 16 points,” he continued. “The guys stepped up and stopped them when we needed to. We eliminated a lot of the big plays tonight, and that has been something that we have been working on.”

Braxton Dudley opened the game by retuning the kickoff 60 yards to the 25-yard line. It took the Redskins eight yards to find the end zone on a nine-yard pass from Cale Bender to Ethan Crock. Bender also hit Crock for a 13-yard completion during the drive. The extra-point kick was no good and Caldwell led 6-0 with 7:37 left in the first quarter.

Conotton Valley put together a drive lasting into the second quarter but turned the ball over on downs. The Rockets defense held the Redskins on the next drive, forcing a punt.

The Rockets then put together a six play, 56-yard drive with Maddox Walter punching it in from the two. Quarterback Zach Putnam hit Walter for a 14-yard pass to highlight the drive. Zach Putnam found Walter in the end zone for the two-point conversion and Conotton Valley took the lead, 8-6, with 6:55 left in the first half. 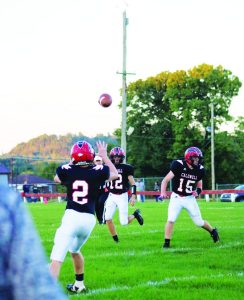 Caldwell had a scoring opportunity late in the half when Dylan Wheeler intercepted a Zach Putnam pass and gave the Redskins the ball on the 26 with less than a minute to play. Bender hit Braxton Dudley with a 41-yard pass to take the ball to the Rockets’ 27, but time ran out before the Redskins could score.

On the opening drive of the second half, Crock recovered a Rocket fumble to give the ‘Skins the ball on the 30-yard line. Marshal Sayre found the end zone on the next play, rambling 70 yards for a touchdown. Paisley Sidwell hit the point-after kick and Caldwell regained the lead, 13-8, with 9:50 left in the third period.

The Redskins got the ball back early in the fourth quarter when the snap sailed over the Rockets punters head and Jase Norman dropped him at the 25. Seven plays later, Bender found Wheeler in the end zone with a seven-yard pass. Bender punched in the two-point conversion and Caldwell led, 21-8, with 8:19 left in the game.

Conotton Valley closed the gap late in the fourth quarter with an eight-play, 52-yard drive. Putnam complete two long passes in the drive, a 13-yard pass to Damon Reardon and a 14-yard strike to Gaige Galigher. Walter finished the series with another two-yard touchdown run and Putnam hit Galigher for the extra points as the Rockets pulled to within five, 21-16, with 2:34 left in the contest.

The Rockets attempted an onside kick, but Alex Herlan fell on the ball to secure the win for the Redskins. 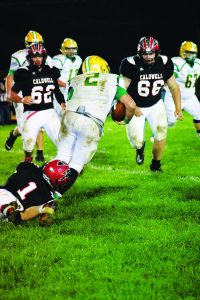 Sayre led the ground attack with 16 carries for 154 yards and a touchdown, Bender ran seven times for 40 yards and Dudley rushed six times for 37 yards.

Defensively, Caldwell forced two Conotton Valley turnovers, an interception by Wheeler and a fumble recovery by Crock. Norman and Sayre each had eight tackles.

The Caldwell defense held the Rockets to just 103 yards rushing and 97 passing yards.

Zach Putnam threw 11-of-16 passes for 97 yards. His leading receiver was Galigher with four catches for 32 yards. Brett Putnam caught three passes for 26 yards and Walter grabbed two for 23 yards,.

Walter carried the ball 27 times for 96 yards and both Rocket touchdowns.

“Maddox Walter is a good ball player for Conotton Valley,” said Coach Rucker. “He didn’t have a lot of carries in the film we watched, but with their quarterback going down in practice this week, we knew he would get a lot of carries against us.”

The 4-2 Redskins will travel to Buckeye Local on Friday to take on the 1-3 Panthers.

“Buckeye Local has been dealing with some injuries and COVID issues,” said Coach Rucker. “We hope to get the opportunity to play them up there. They are a good team with a big offensive line and a hard-nosed running back. They are going to try to run the ball right at us.”