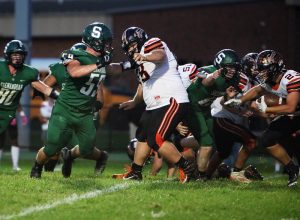 After three consecutive setbacks, the Shenandoah Zeps were in need of an identity, and thanks to a tremendous effort by junior running back Tyce DeVolld and a fired-up bunch of blockers, the Zeps may have found exactly what they were searching for.

With DeVolld carrying the football a whopping 37 times for 239 yards and two touchdowns, Shenandoah celebrated its 2021 Homecoming with a 22-12 victory over visiting Marietta on Friday.

“We’ve been building up to this,” said Zeps’ coach Johnny Jones after his team improved to 2-3. “We finally found an identity tonight. We know that we can run the football and we’re going to build off of that.”

While DeVolld gets most of the “ink” for his breakout performance, the effort of the guys who opened the holes are noteworthy. That group includes the five linemen – seniors Alden House and Xavier Hannahs, juniors Hunter Schott and Jared Trenner and sophomore Jace Anderson -along with junior tight end Joel Rataiczak and sophomore fullback Jacob Feldner. 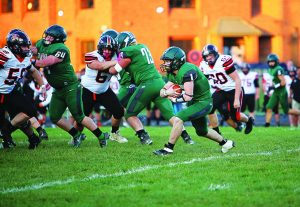 “We’re going to lean on our offensive line,” said Jones, “but when Tyce gets going, he’s an animal. He runs like there’s no tomorrow. He’s finding the holes now that he wasn’t finding three weeks ago. He’s seeing them and trusting the O-line and they delivered big-time tonight.”

The first half proved frustrating for the Zeps, who had no less than three scoring chances come up empty.

On its first possession, Shenandoah put together a 12-play drive that went from its 15-yard line to the Marietta 12, but a holding penalty set the hosts back and a fourth-down pass was stopped well short of a first down. 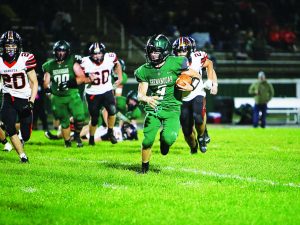 Early in the second period, the Zeps again threatened at the Tigers’ 20, but a third-down pass completion was fumbled and Marietta recovered at the seven-yard line.

The Tigers turned the ball over two plays later, with Rataiczak making the hit and Schott recovering at the Marietta seven.

Three runs netted just two yards, however, and a fourth-down pass was incomplete giving the ball to the Tigers at their five-yard line.

From there, Marietta put together a 10-play, 95-yard drive for the game’s first score.

Sophomore QB Tyler Gerber completed three passes for 45 yards to senior Kayden Durham and senior back Zach Bartlett ripped off a 34-yard run to spark the drive and then Bartlett got the TD on a one-yard run.

The point-after kick was blocked by Rataiczak, but the Tigers had a 6-0 lead with 1:26 remaining in the first half.

Shenandoah marched 56 yards in nine plays to start the third quarter, with the key play a 20-yard run by DeVolld on a fourth-and-two at the 40. The score came when junior QB Nathan Van Fleet had a pass deflected, but it caromed into the waiting arms of sophomore wideout Brenden Portman for an eight-yard TD. 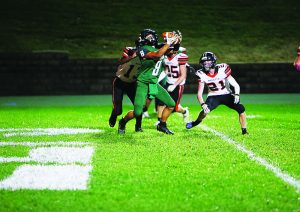 DeVolld ran up the gut for the two-point conversion, putting the Zeps on top, 8-6, with 8:01 remaining in the third quarter.

A bad punt snap and short kick gave the hosts possession at midfield, and a 13-play scoring series ensued.

Van Fleet hooked up with Portman twice for 24 yards and DeVolld carried seven times, including the final yard for “six” and then he tacked on the bonus markers to build Shenandoah’s lead to 16-6 at the 2:21 mark of the third chapter.

Portman intercepted Gerber’s pass on the Tigers’ second snap following the kickoff, and the Zeps were back in business at the Marietta 28-yard line.

It was time for more DeVolld who carried four straight times, including two 11-yard gainers and the final five yards to the end zone.

A fumble foiled the PAT, but the Zeps had widened the gap to 22-6 with 32 ticks left in round three.

Sophomore Sam Townsend came up with his second pass interception of the night on Marietta’s next series, but the Tigers had one more score in them thanks to a 74-yard pass from Gerber to sophomore Elyjah Lieras-Kelley, who got behind the Zeps’ secondary at midfield and raced untouched to the end zone. 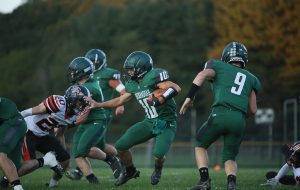 The two-point try failed, leaving Shenandoah on top, 22-12, with 6:10 remaining and the Zeps were able to convert two fourth downs to successfully run out the clock.

Jones shouldered the blame for his team’s failure to put points on the scoreboard in the first half, but credited some halftime adjustments and his team’s perseverance for getting things going in the third quarter.

“As coaches, we’ve got to make better play calls in those situations so we went to the board at halftime and put our guys in a better position to win,” he said. “We put up three touchdowns in the second half against them and I’m really proud of the kids for that.”

The Zeps finished with 360 total yards, including 295 rushing and 65 passing. Van Fleet completed 7-of-14 passes, with Portman catching four balls for 33 yards and a TD.

With only one big scoring play allowed, Jones was pleased with the overall effort of his defense.

“Having 66 (senior defensive tackle Preston Mackie) back in the middle was huge to clog things up in there,” he offered. “We didn’t want to give up the big plays and they did get one at the end, but overall we’re happy with how our defense played tonight.

“We’ve got to keep building off of this,” said Coach Jones. “This was a great team victory and we needed a game where we got rewarded for progressing like we have been.”

Prior to the game, Charlize Hadix was crowned Shenandoah’s 2021 Homecoming Queen. 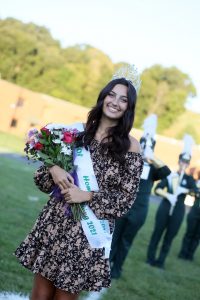 The Zeps go on the road this week, facing Monroe Central at Woodsfield on Friday at 7 p.m.

The Seminoles are 2-3on the season, with victories against Bridgeport and Magnolia while its losses were to Union Local, River, Caldwell and Buckeye Local.

Monroe Central leads the all-time series, 18-8, but Shenandoah has won three of the last four meetings.