Coach Kelly Zehnder’s squad, ranked No. 9 in Division II in last week’s OHSVCA state poll, improved to 11-1 overall and 8-1 in the MVL.
The Colts got win No. 10 on Tuesday, sweeping River View by 25-13, 25-14 and 25-15 scores.
MHS showed good balance at the net, with Cami Black collecting nine kills followed by Megan DeVillez with eight, Kendyl Cannon with seven and Karly Launder with six. Ella Jefferis dished out 28 assists while Cannon and Black each had three service aces.
Black led the defense with 12 digs while Launder had nine and Mylee Arnold had eight.

Win No. 11 at Maysville came quickly as the Lady Colts won by 25-7, 25-12 and 25-7 scores.
Black and Cannon each pounded 11 kills, with Jefferis contributing six and DeVillez and Taylor Sichina each getting five.
Launder served up five aces and Sichina had three while Jefferis handed out 33 assists.
Defensively, Mila Norman and Launder each recorded a dozen digs followed by Arnold with 11 and Black with 10. Cannon and Jefferis each had two blocks.

The Lady Colts visit New Lexington on Tuesday; host Coshocton on Thursday (JV action at 5:30 p.m. both nights) and compete in a triangular match with Tuscarawas Valley at Dover on Saturday starting at 10 a.m. 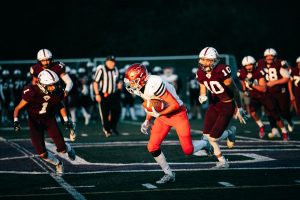 Homestanding John Glenn handed Meadowbrook a 35-7 setback in Muskingum Valley League action on Friday.
The win improved the Muskies to 3-2 on the season while dropping the Colts to 4-2. Both teams are among the top eight in the current OHSAA Division IV, Region 15 computer ratings, with John Glenn now fourth and Meadowbrook eighth.
The first half was close, with the teams scoreless after one quarter before John Glenn broke the ice following a pass interception by Colt Everson, scoring on a two-yard touchdown pass from Brad Morgan to Nathan Walker for a 7-0 lead.
Meadowbrook evened the score at 7-0 via a one-yard TD run by quarterback Josh Hupp. Garrett Milam added the point-after kick.
The Muskies moved on top for good thanks to a 28-yard TD pass from Morgan to Emerson, giving JG a 14-7 lead at the intermission.
The second half was all John Glenn, with a pair of third quarter scores – a 47-yard TD run by Noah Wellmeier and a nine-yard TD pass from Morgan to Barclay – pushed the lead to 28-7.
The Muskies sealed the deal with one more trip to the end zone in the final period – an 8-yard TD run by Wellmeier.
John Glenn had a 309-226 edge in total yards. The Muskies collected 206 yards on the ground and 103 through the air while the Colts gained 223 through the air, but a net of just three yards on the ground. 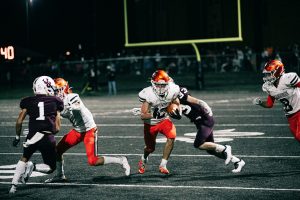 Meadowbrook’s Hupp was 20-of-43 passing for 228 yards while Damen Launder completed one pass for minus-five. Hunter Eubanks caught seven passes for 62 yards; Brady McManaway had five receptions for 47 yards and Trevon Mayle latched onto four for 48 yards.
Defensively, McManaway had nine total tackles followed by Eubanks with eight and Zayne McGuire with seven.
Wellmeier rushed for 214 yards and two TDS on 30 carries to lead JG while Emerson caught three passes for 73 yards and two scores.
JG completed 9-of-16 passes; had 19 first downs and two penalties for 15 yards. The Colts collected 14 first downs and were flagged 10 times for 91 yards.
—

Meadowbrook returns to the friendly confines of Eugene Capers Field to take on New Lexington on Friday at 7 p.m.

The Colts tuned up for OHSAA Division II Sectional Tournament action by competing in the Coshocton Eastern District Open at River Greens Golf Course in West Lafayette on Saturday.
Meadowbrook finished 10th in the 18-team field with a 363 score. Hiland was an easy winner at 281 and Garaway was second at 313.Eltringham carded an 82 to lead MHS followed by Baier (88), Dennis (95), Eibel (98) and Grafton (106).
The Hiland trio of Carter Mishler, Brookston Hummel and Kenny Weaver shared tri-medalist honors with 69s.

The Colts compete in the OHSAA Division II Sectional at Cadiz Country Club on Monday, with the top four teams and top four individuals on non-qualifying teams advancing to the D-II District at EagleSticks Golf Club in Zanesville on Monday, Oct. 4.