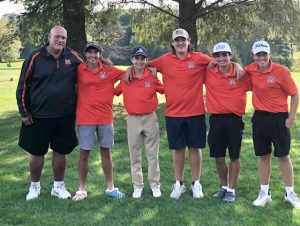 The Meadowbrook Colts qualified for the OHSAA Division II District Tournament thanks to a fourth-place finish in the D-II Sectional at Cadiz Country Club.

Senior Cole Eltringham once again led Meadowbrook with an 18-hole score of 84. Sophomore Owen Dennis and freshman Owen Coss both carded 89s; sophomore Damon Baier shot a 92 and freshman Steven Grafton had a 97.

Also advancing were the top four individuals not on qualifying teams – Nathan Kelley of East Liverpool (78), Adam Smith of Cambridge (82), Braden Porter of Union Local (82) and Koi Preston of Claymont (83).

St. Clairsville’s Will Foster was the sectional medalist with a 72, five shots better than Barnesville’s Carter Wells.

The Meadowbrook JVs dropped a 196-205 decision to Fort Frye at Lakeside Golf Coruse in Beverly on Thursday.

The Colts will compete in the Division II District Tournament at EagleSticks Golf Club in Zanesville. 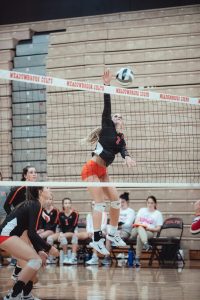 The state-ranked Meadowbrook Lady Colts picked up four more victories, defeating New Lexington and Coshocton in Muskingum Valley League matches and then taking a tri-match with Dover and Tuscarawas Valley.

Jefferis handed out 36 assists while Launder had five aces and Cannon had three.

Black tallied 21 digs followed by Mylee Arnold with 16, Launder with 11 and Sichina with eight.

Black was again a force at the net with 16 kills. Cannon and DeVillez each had six and Launder, Jefferis and Sichina each had four.

Launder and Arnold both had 11 digs on defense while Black added nine.

Against Dover, Black led with 10 kills while Cannon had five and Jefferis had four.

Jefferis notched 18 assists while Launder had three aces and Black had two.

Black and Launder both recorded nine digs; Jefferis had seven and Arnold had six.

Against Tusky Valley, Black was charted with 18 kills, boosting her season total to 237.

Jefferis handed out 25 assists while Black had three aces and Launder had two.

Arnold led in digs with 13 while Black had 11, Launder eight and Jefferis seven.

The Lady Colts visit Morgan on Tuesday and host West Muskingum on Thursday, with JV action starting at 5:30 p.m. both nights.

The Meadowbrook Colts bounced back strong from last week’s loss to John Glenn by blanking New Lexington, 28-0, for a happy Homecoming at Eugene Capers Field on Friday.

With the victory, Coach Steve Norman’s squad (5-2) remained a solid contender for a first round playoff game in Division IV, Region 15.

The Colts did all of their scoring in the first and fourth quarters and that was plenty as the “D” pitched its first shutout of the season while forcing four turnovers.

Meadowbrook got on the scoreboard first on a three-yard touchdown run by Sam Bopp, with Garrett Milam adding the point-after kick for a 7-0 MHS lead.

Later in the first quarter, Kaden Casey tallied on a two-yard run, with Milam again connecting for the PAT to give the hosts a 14-0 upperhand.

The Colts put the game away with two scores in the final 12 minutes, the first on a 51-yard TD scamper by Brady McManaway, with Milam’s third extra-point kick extending the lead to 21-0.

McManaway then sealed the deal with a 24-yard TD run, and Milam closed the scoring with another point-after kick.

Meadowbrook finished with 481 yards of total offense, with 344 on the ground and 137 through the air.

Bopp and McManaway provided a strong one-two running punch with 137 and 124 yards, respectively, while Hupp added 44 and Casey had 36.

Hupp completed 11-of-25 attempts, with Hunter Eubanks as his favorite receiver with seven receptions for 110 yards.

Defensively, McManaway led the charge with a dozen tackles (four solos) while Aiden Reis had seven. Eubanks recorded two interceptions and recovered one fumble, with McManaway also pouncing on a New Lex fumble.

New Lexington (2-5) completed 10-of-28 passes with two interceptions, good for 100 yards, while the running game accounted for 82 yards.

Meadowbrook had seven penalties for 90 yards and New Lex was flagged six times for 45 yards.

The Colts travel to Coshocton on Friday, with kickoff set for 7 p.m.

The Meadowbrook girls finished third in the big school division of the Cambridge Cross Country Invitational on Saturday.John Glenn took the team title with a score of 50 while John Marshall was second with 80 and Meadowbrook third with 97.Leading the way for the Lady Colts was Taylor Forbes, who finished in 12th place (22:50). Other MHS girls were Lily Norman (16th, 23:15), Kenli Norman (18th, 23:26), Loryn Ogle (20th, 23:38) and Kendyl Trott (32nd, 24:49).Tusky Valley’s Hannah Wyler was the individual winner in 19:26.In the boys’ big school meet, John Glenn prevailed with 49 points while Indian Valley was the runner-up with 62. Meadowbrook, competing without top runner Kendell West, finished 10th with a 237 total.Jackson Lendon led the Colts with a 39th place finish (20:26) followed by Jacob Banister (41st, 20:42), Drew Webster (58th, 21:42), Caleb Blackledge (62nd, 21:50) and Drake Deman (73rd, 22:29).John Marshall’s Mack Allen was the individual winner in 16:26—The Colts are off for a week before hosting in the Muskingum Valley League Championship Meet on Saturday, Oct. 16 starting at 10 a.m.