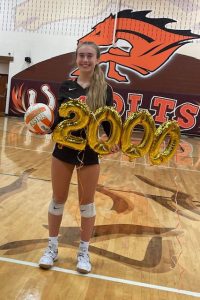 Put three more victories in the hopper and a milestone was reached by junior Ella Jefferis as the state-ranked Meadowbrook Lady Colts improved their record to a sparkling 18-1.

Jefferis handed out 26 assists and Cannon had three service aces.

Black led the defense with 10 digs while Jefferis had seven. Mylee Arnold and Launder both had five and Mila Norman had four. 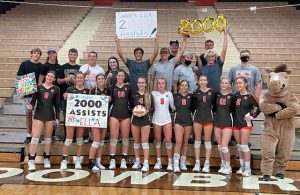 Highlighting the match was junior Jefferis surpassing the 2,000 career assist mark with a 31-assist effort which boosted her career total to 2,024. She’s on track to break the all-time school record of more than 2,700 set by Marinda Marsinek next season.

Defensively, Launder recorded a dozen digs followed by nine each from Jefferis and Black and seven from Norman.

Meadowbrook had good balance at the net, with Black and DeVillez both recording 11 kills followed by Launder with 10, Cannon with eight and Sichina with seven.. Jefferis added 41 assists to her impressive career total and Launder had five aces.

Black and Launder led in digs with 13 and 12, respectively, while Arnold added eight and Norman had six.

The Lady Colts (18-1, 13-1 MVL), who were ranked No. 9 in this week’s OHSVCA Division II state poll, close out the regular season with three matches this week – Tuesday at Crooksville, Thursday at home against John Glenn and Saturday at Cambridge.

The Meadowbrook Colts continued their quest for a first-round home playoff game with a 42-21 victory at Coshocton on Friday.

Coach Steve Norman’s squad improved to 6-2 on the season, with the only losses to 6-2 Mogadore and 5-2 John Glenn. The Colts are currently sixth in the OHSAA Division IV, Region 15 computer ratings.

Meadowbrook enjoyed a big 581-282 edge in total yards, with quarterback Josh Hupp enjoying a big night by completing 21-of-28 passes for 397 yards and three touchdowns with one interception. He also added 44 yards rushing and three scores.

Hupp’s favorite targets were Hunter Eubanks and Brady McManaway, with Eubanks catching eight passes for 135 yards while McManaway had seven catches for 156 yards and a TD. Tye Griffith landed three balls for 80 yards.

Four players shared in the ground attack, with Sam Bopp rushing for 51 yards on 12 attempts; Kaden Casey gaining 45 on eight tries and McManaway adding 44 on eight rushes in addition to Hupp’s 44.

After spotting Coshocton a 7-0 lead on a 38-yard TD pass, Meadowbrook got on the scoreboard with a one-yard TD run by Hupp, but the extra-point was missed leaving the Colts down, 7-6.

A 14-yard TD run pushed Coshocton’s lead to 14-6, but again the Colts responded and Hupp scored from two yards out and then hit Eubanks for a two-point conversion to tie the score at 14-all.

Another Hupp TD – this time a four-yard run – put the Colts in front, with Garertt Milam’s point-after kick making it a 21-14 MHS lead at the half.

A 12-yard TD pass from Hupp to Romeo Dorsey, with Milam again nailing the PAT, widened the lead to 28-14 after three quarters.

The Colts tacked on two more scores in the fourth period – a 15-yard Hupp-to-McManaway TD toss and a 10-yard Hupp-to-Casey strike – with Milam adding the point-after each time.

Coshocton’s final score came after the Hupp-McManaway pass on an 84-yard kickoff return.

The Colts were penalized 13 times for 105 yards while the Redskins drew four flags for 20 yards.

The Colts play their home finale Friday against Morgan, with kickoff at Eugene Capers Field set for 7 p.m.

Carrollton won the district team title and will be joined by John Glenn in the OHSAA D-II State Tournament. The Warriors carded a 312-stroke score while the Muskies shot 316 one shot better than third place Garaway. Meadowbrook tallied a 358 for eighth place.

Coach Mel Pesuit’s squad was led by senior Cole Eltringham, who posted an 84 while sophomore Damon Baier was right behind with an 86. Rounding out the Colt scores were sophomore Owen Dennis (90), freshman Ben Coss (98) and freshman Steven Grafton (101).

Meadowbrook finished the season with an 84-87 overall record including 18-15 in the Muskingum Valley League and 15-12 in duals.

After a week off, Meadowbrook will host the Muskingum Valley League Cross Country Championship Meet on Saturday starting at 10 a.m.