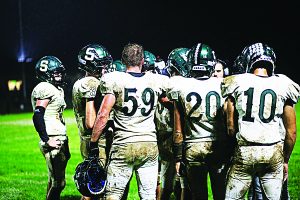 Stuck in the mud.

Both Waterford and Shenandoah had trouble getting things going on a sloppy field, but the homestanding Wildcats were able to turn to big plays into first half scores en route to a 14-6 victory on Friday.

The Zeps, meanwhile, spent nearly as much time going backward as it did forward with a dozen negative yardage plays resulting in minus-95 yards and only managed to convert one of three Waterford turnovers into scores.

“That’s a good football team,” said first-year Shenandoah coach Johnny Jones. “They’re physical and they like to run the ball, and I told our guys they made less mistakes than we did and that was the difference.

“It was terrible weather and usually mistakes will be a big factor,” he added. 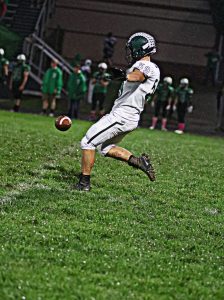 The teams exchanged punts early, with the Zeps pinned inside their 10-yard line and forced to kick again, and this time Waterford returned the kick 24 yards to the Shenandoah 13.

After a short gain, lightning was spotted resulting in a 35-minute delay but when the action resumed, the Wildcats quickly converted the excellent field position in to points when senior QB Grant McCutcheon hit junior Jacob Pantelidis for an eight-yard touchdown on a fourth-and-five play.

Senior back Holden Dailey ran in the two-point conversion to give Waterford an 8-0 lead at the 3:01 mark of the first quarter.

The Zeps had an opportunity to put points on the board with less than four minutes remaining in the first half when the ball squirted away from the Waterford punt returner like a slippery pig and was eventually recovered by Shenandoah sophomore Hunter Yates at the Wildcats’ 27.

A fourth down pass came up a yard short at the 9, and on Waterford’s first play following the change of possession, McCutcheon connected with Dailey, who eluded the last Zep defender at the 40 and headed for the end zone to finish off an 81-yard touchdown.

The try for the two-point conversion was stopped short, but the hosts had increased their lead to 14-0 with 1:46 remaining in the half.

Waterford fumbled the ball away on its second snap of the third quarter, with sophomore Sam Townsend pouncing on the ball at the Wildcats’ 15.

Three plays went nowhere, but the Zeps got on the board when junior QB Nathan Van Fleet eluded the rush, stepped up and found Yates alone in the end zone for a 15-yard TD. 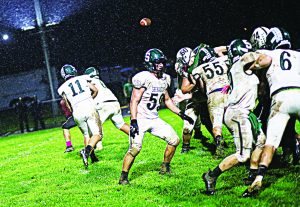 The two-point pass was incomplete, but the Zeps were within a score, down 14-6 with 9:51 left in the third chapter.

The Zeps turned the ball over at the 4:26 mark of the third round when a high shotgun snap sailed over the head of Van Fleet; was picked up by freshman Max Roberts 20 yards downfield and returned all the way to the Shenandoah 17.

The Shenandoah “D” came up with a turnover on a fourth-and-11 at the19m, with Townsend getting the “pick” of a Daily halfback pass in the end zone.

Shenandoah had two more possession, the first ending on a fourth-and-one at the Waterford with a fumbled snap and then the final series short-circuited with a sack and two more big losses on faulty snaps.

Despite falling to 2-5, Coach Jones continues to see positive signs from his team.

“We had to go without Tyce tonight,” he said, referring to junior back Tyce DeVolld, “but I thought Sam did a nice job and ran hard.

“We had a few guys make plays and we had a chance to make some others,” Jones continued, “and that’s what we want.

“We preach not shooting ourselves in the foot,” the SHS coach added. “It’s hard to simulate practice under these conditions, but hats off to them…they came out on top.”

Van Fleet completed 10-of-19 passes for 89 yards, with Yates catching six for 61 yards and a TD and Rataiczak landing three for 25 yards. Townsend rushed 15 times for 70 yards, but the negative plays left the Zeps with a net of just 11 yards on the ground.

McCutcheon was 4-of-6 passing with two TDs and Daily rushed 18 times for 60 yards, but 40 on those yards came on one play.

Shenandoah plays its final home game Friday against Barnesville, with kickoff set for 7 p.m. The Shamrocks are coming off a 57-12 rout of Monroe Central. Barnesville’s other wins came against Buckeye Local, Buckeye Trail, River, Steubenville Catholic and Toronto while its lone setback was to Shadyside.