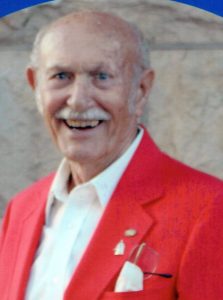 He was born at Woodsfield, Ohio on January 5, 1924 a son of the late Herman and Sylvia Mowder Zerger.

Herman was a 1942 graduate of Woodsfield High School, Woodsfield, Ohio and was also a retired owner and operator of Zerger’s Quarry for over 50 years. He served 10 years as a Special Duty Sheriff in Monroe County and was elected five consecutive terms as Center Township Trustee. He was a member of the First United Methodist Church, Woodsfield, Ohio. During WW II in 1942, he enlisted in the U.S. Army and served as a Platoon Sergeant with Rifle Co. I-141st Infantry, 36th Infantry Division. He fought 300 days on the front line in 31 battles in both Italy and France. He cast his first vote (for Franklin Delano Roosevelt) from a foxhole facing the Germans before being taken as a prisoner on February 3, 1945 by the SS troops.

In addition to his parents, he was preceded in death by two sisters, Doris Williams and Ruth Roth; a step-son, Gary Russell and a step-daughter, Chris Russell Schenerlein.

In lieu of flowers, memorial contributions may be made to the 1st United Methodist Church, 136 N. Main Street, Woodsfield, Ohio 43793.

Due to current Covid conditions, guests are asked to follow recommended safety guidelines at all gatherings.