The Meadowbrook Colts will ride a four-game winning streak into the postseason thanks to Friday night’s 49-20 victory at West Muskingum in the regular season finale.

Coach Steve Norman’s squad finished the regular season with a fine 8-2 record, the only losses to Mogadore and John Glenn. The Colts captured the Muskingum Valley League’s Small School Division for the second straight year, finishing 5-0 in the league while West M (6-4) was 4-1.It was a record-setting day for Colts’ QB Josh Hupp, who completed 31-of-40 passes for 376 yards and three touchdowns, with the completion total setting a MHS school record. He also boosted his season passing yardage total to 2678 yards and has 172 completions for the season, both also setting school records.Meadowbrook jumped out to a 13-0 first quarter lead – with Hupp scoring on a one-yard TD run and Sam Bopp tallying from six yards out, with Garret Milam adding the PAT kick following the second score.After West M got even at 13-13 on a one-yard TD run by QB Harley Hopkins and an five-yard TD pass by Hopkins, Hupp teamed with Tye Griffith for a 25-yard touchdown to put the Colts on top, 20-13, at the intermission.A five-yard TD run by Brady McManaway and Milam’s extra-point extended Meadowbrook’s lead to 27-13, but West M got a four-yard TD run to get back within one score at 27-20.The Colts pulled away from there, however, with a Hupp-to-Kaden Casey TD covering 25 yards pushing the lead to 34-20 and then two fourth quarter scores – a 16-yard scoring strike from Hupp to Hunter Eubanks (Hupp running for the two-point conversion) and a 23-yard TD run by Casey (Milam kicking the PAT) – put the game on ice.The Colts finished with 551 yards of total offense, adding 175 rushing yards to Hupp’s passing total.Casey led the running game with 66 yards on nine carries followed by McManaway with nine for 58 and Bopp with eight for 44. Eubanks led the receivers with nine catches for 95 yards; Launder had seven catches for 90 yards and McManaway had seven for 67; and Romeo Dorsey and Griffith each caught three, Rosey for 47 yards and Griffith for 40.West M had 250 total yards, with 152 through the air and 98 on the ground. The Tornadoes were 15-of-25 passing with two INTs..Defensively, Eubanks was charted with 10 total tackles (five solos); Aiden Reis had eight; and McManaway and Kahle Flowers each had seven. Dorsey and Launder had interceptions.Meadowbrook had a whopping 17 penalties for 175 yards while West M was flagged seven times for 57 yards.—The Colts finished sixth in Division IV, Region 15 and will host No. 11 Vinton County (6-3) in the opening round of the OHSAA Division IV, Region 15 playoffs on Saturday at 7 p.m. at Eugene Capers Field.Vinton County’s wins were against Unioto, Crooksville, Athens, Alexander, River Valley and Wellston while its losses were to Zane Trace, Warren and Nelsonville-York.

The second-seeded Meadowbrook Lady Colts kept the ball rolling to start tournament play, sweeping past No. 18 seed Zanesville by 25-5, 25-12 and 25-7 scores in an OHSAA Division II Sectional Tournament final on Thursday.Coach Kelly Zehnder’s squad, which was ranked seventh in the final OHSVCA Division II state poll of the season, improved to a sparkling 22-1.Junior Cami Black was charted with nine kills to lead Meadowbrook while sophomore Karly Launder had five, with junior Kendyl Cannon and sophomore Taylor Sichina each getting three. Junior Ella Jefferis dished out 21 assists.Launder led in service aces with five followed by Jefferis, Cannon, Sichina and junior Mylee Arnold with four apiece.Defensively, Black, Launder and junior Mila Norman each had seven digs; Arnold and Jefferis both had five and Sichina added four.—Meadowbrook takes on No. 7 seed John Glenn on Tuesday at 6 p.m. in the D-II District Semifinals at Cambridge. JG advanced with a four-set win over No. 14 seed West Holmes – 25-15, 25-15, 22-25, 25-19. 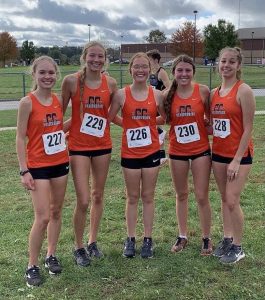 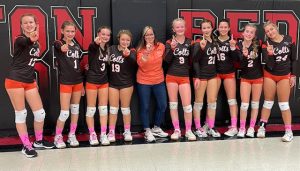 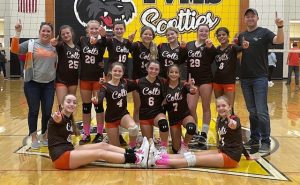 The Meadowbrook seventh and eighth grade volleyball teams scores a sweep of the Muskingum Valley League volleyball championships. The seventh grade team defeated second-seeded Sheridan, 25-21, 21-25 and 25-19 to complete a perfect 18-0 season. The eighth grade squad knocked off top-seeded New Lexington, 25-20 and 25-12 to cap a 16-1 campaign.