On to the Regional!

Coach Kelly Zehnder’s squad improved to 24-1 and will play in an all-Muskingum Valley League regional semifinal against Tri-Valley on Thursday at 6 p.m. at Heath High School. Tri-Valley advanced with a four-set win over Dover – 25-23k 20-25, 25-21, 21-18 – in the other D-II District semifinal. Tri-Valley handed Meadowbrook its only loss of the season

Cami Black had another big day at the net for the Lady Colts, pounding 19 kills to boost her season total t 351. Taylor Sichina, Megan DeVillez and Kendyl Cannon each had five kills. 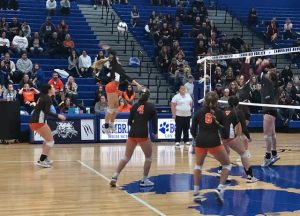 Meadowbrook advanced to the title match by sweeping seventh-seeded John Glenn, 25-18, 25-21 and 25-16 in a semifinal match at Cambridge on Tuesday. 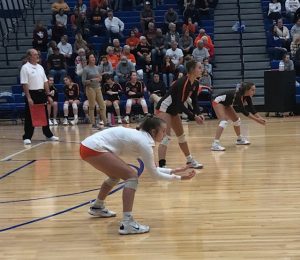 Black pounded a dozen kills to lead MHS, with Cannon collecting six and DeVillez and Taylor Sichina each posting five.

Jefferis handed out 28 assists and had three aces while Cannon served four aces.

Arnold and Launder both had 13 digs to lead the Colts’ defense followed by Black with nine, Norman with eight, Cannon with seven and Sichina with six.

The Meadowbrook Colts had the offense in high gear for their OHSAA Division IV, Region 15 playoff opener against Vinton County as the 6th-seeded Colts racked up 557 yards of offense and scored on all nine offensive possessions en route to a 64-34 victory over the 11th-seeded Vikings at Eugene Capers Field on Friday.

Turning in sparkling performances for Coach Steve Norman’s Colts were running back Kaden Kasey, who carried the ball 16 times for 201 yards caught two passes for 61 yards, good for five TDs;; quarterback Josh Hupp, who completed 21-of-29 passes for 275 yard and two TDs; and receiver/defensive back Hunter Eubanks, who caught eight passes for 102 yards and a TD and came up with two defensive “takeaways” – and interception and a fumble recovery.

Not to be left out was a record-setting performance by placekicker Garret Milam, who was 8-for-8 on extra-points to break the old mark of seven set by current Oklahoma State University senior guard Josh Sills.

Meadowbrook – which played without two-way standout Brady McManaway who was sidelined with an injury – had the opening possession and quickly drove 67 yards in seven plays.

Casey had runs of nine, eight and 32 yards; Hupp completed a nine-yard pass to Hunter Eubanks and then Hupp got the payoff on a 10-yard option keeper.

Milam nailed the point-after kick and the Colts were on top, 7-0, at the 10:23 mark of the first quarter.

The Colts struck in lightning fashion with their second series, with Casey ripping off a 78-yard touchdown run on the first snap, and Milam booted the PAT to increase Meadowbrook’s early lead to 14-0 with 7:04 remaining in the opening round.

After stopping the Vikings on downs inside the Meadowbrook 40-yard line, the Colts widened the gap to 21-0 with a 10-play drive featuring a 22-yard pass from Hupp to Damen Launder; a couple of nice runs by Sam Bopp setting up an eight-yard run to paydirt by Casey. Milam’s left foot was again true and the Colts had taken control.

The Colts’ defense came up with a takeaway as Eubanks recovered a VC fumble at the Vikings’ 43.

Ten plays later, Casey went into the end zone standing up from a yard out to cap a series that featured a 24-yard Hupp-to-Romeo Dorsey pass connection.

Milam stayed perfect on PATs, pushing Meadowbrook’s lead to 28-0 with 8:47 remaining in the first half.

Vinton County finally broke through with a five-play, 76-yard drive, capped by a 40-yard TD sprint by Zane Carr. Gabe Raschke kicked the extra-point, pulling the Vikings within 28-7 with 7:24 left in the second period.

Meadowbrook countered that score quickly, covering 54 yards in six plays with Hupp hitting Eubanks deep down the middle for a 44-yard scoring strike. Milam’s kick had the Colts on top, 35-7, with 5:58 until halftime.

The Vikings got their second score with an eight-play, 65-yard drive finished off by a 27-yard TD run on a counter play. Raschke hit the PAT to cut the Colts’ lead to 35-14 with 2:47 to go in round two.

That left Meadowbrook plenty of time to score again, with Hupp again working his magic by rolling left and throwing to Casey in the end zone for a 41-yard score with 25 seconds on the clock. Milam’s sixth PAT of the half made it 42-14 in favor of the Colts and an interception by Eubanks on a halfback pass sent the teams to the locker room.

Vinton County started the second half with a quick scoring series, Carr getting another long TD – this time covering 55 yards – followed by Raschke’s extra-point which narrowed the gap to 42-21 with 9:51 on the third quarter clock.

The Colts answered in just five plays, with Hupp completing a 17-yarder to Launder, an 11-yarder to Eubanks ad a 12-yarder to Griffith before Bopp got the “six” from four yards out. Milam was still automatic with the PAT and the MHS lead was back to 28 at 49-21 with 8:16 left in the third period.

Next came a two-yard TD run by Carr, with Raschke’s point-after pulling the Vikings back within three scores, 49-28, with 3:01 remaining in round three.

Meadowbrook got another TD before the third quarter ended, with Bopp tallying on an eight-yard run set up by his 44-yard gainer. Milam’s boot made it 56-21 with 1:56 left.

The workhorse Moore got Vinton County’s next TD on a one-yard run, but Meadowbrook’s ‘D’ stopped Carr on the two-point conversion run for a 56-34 reading with 8:37 left in the contest.

Meadowbrook made it nine-for-nine with a TD on every possession, with Casey getting his fifth TD on a 12-yard run, and Hupp ran in the two-point conversion to extend the lead to 30 at 64-34 with 3:52 remaining and an INT by Dorsey of the Colts closed it out.

Meadowbrook’s offensive outburst included 282 yards rushing and 275 passing. Vinton County countered with 398 offensive yards, with all but three on the ground. In addition to Eubanks, the Colts got five catches from Launder for 60 yards and four by Griffith for 27.

Eubanks led the MHS defense with 11 total tackles while Trevon Mayle and Joel Weigand each had 10.

Vinton County’s one-two punch of Carr and Moore combined for more than 360 yards, with Carr rushing 20 times for 219 yards and Moore adding 28 carries for 145 yards.

Meadowbrook takes on John Glenn in the second round, with the No. 6 seeded Colts and No. 3 seeded Muskies (7-3) meeting in a rematch at New Concord on Friday at 7 p.m. John Glenn advanced with a 35-21 victory over No. 14 Union Local. The Muskies handed the Colts a 35-7 loss during the regular season.