The Caldwell Redskins hosted the Frontier Cougars in an OHSAA Division VII, Region 27 opening round playoff game, with the hosts getting the 48-7 victory Saturday night at the Noble County Fairgrounds.

“Getting to the playoffs and winning was one of our main goals and we got it accomplished,” said first-year Caldwell coach Chance Rucker, who credited his offensive line and standout running back Marshal Sayre for delivering big-time.

“Up front we just had to execute on the offensive line,” he continued. “That is what we emphasized all week and we had to get the job done. That is one thing that we have been lacking in the second half of the season and that was our main emphasis. Tonight, we executed and rushed for 400 yards. I can’t ask for a better offensive line. 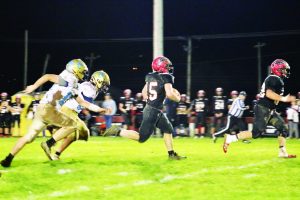 Caldwell running back Marshal Sayre (15) leaves a pair of Frontier defenders behind as he breaks into the open field during Saturday’s Division VII, Region 27 playoff opener at the Noble County Fairgrounds. The Redskins won 48-7. Photo credit: Melinda Sayre

“Marshal Sayre is a heck of an athlete.” Rucker stated. “He runs the ‘rock’ hard’ and he has the vision. We have big expectations for him. He is only going to grow and get better.

“Running the football will always open big passing lanes and we took advantage of it tonight,” he added.

Rucker was also pleased his “D” limited the Cougars to just one score.

“Our defense was stellar,” the Redskins’ boss noted. “The last few weeks, we have been playing excellent defense. They did score one on us that was kind of a fluke play. We just have to keep rolling.”

Caldwell started the scoring on its first drive of the game, going 79 yards in seven plays with quarterback Cale Bender running it in from 13 yards out. There were several big plays in the drive including a 15-yard run by Dylan Wheeler, a 17-yard jaunt by Sayre and a 20-yard pass completion from Bender to Sayre. Paisley Sidwell hit the point-after kick and the Redskins led, 7-0, with 7:01 left in the first quarter.

Frontier answered quickly with a five-play, 68-yard scoring drive with the TD coming on a 51-yard pass from JD Schmidt to Tanner Bills. Lucas Cox hit the extra-point kick and the game was tied at 7-7 with 4:36 left in the opening period.

After the teams exchanged punts, Caldwell put together another scoring drive, this time taking six plays to travel 69 yards. Bender opened the series with a 14-yard run and he finished it off  hitting Alex Herlan with a 32-yard touchdown strike. Sidwell nailed the conversion kick and Caldwell regained the lead, 14-7, with 9:58 left in the second quarter.

The Caldwell defense forced the Cougars to punt and then took the ball down the field 51 yards in five plays for another touchdown. Sayre was the workhorse on the drive, carrying the ball for 20 and 23 yards before punching it in from the four. The point-after kick by Sidwell was good and Caldwell led, 21-7, with 5:47 left in the half.

The Redskins scored again on their next possession, needing just six plays to go 90 yards. Sayre carried the ball twice in the drive for 26 and 22 yards and Bender toted it for nine and 20 yards. Bender then hit Dylan Wheeler in the end zone for an 18-yard touchdown. Sidwell split the uprights with the extra-point kick and Caldwell extended its  lead to 28-7 with 40 seconds left before halftime. 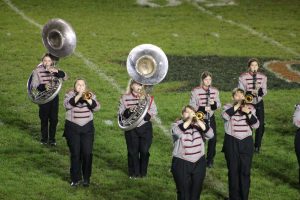 Caldwell received the kickoff to start the second half and went 65 yards in 10 plays, with Bender hitting Sayre with a 35-yard touchdown pass. The other big plays of the drive were a Bender to Wheeler pass for 19 yards and another Bender completion to Ethan Crock for 13 yards. Sidwell nailed the PAT kick and the Redskins went up, 35-7, with 6:10 left in the third quarter.

The Redskins scored again late in the third quarter, needing just three plays to go 30 yards with Sayre carrying the ball all three plays and punching in another TD from six yards out. Sidwell made the extra-point kick and Caldwell led 42-7 with 22.9 seconds left in the third period.

Caldwell’s special teams stepped up on the ensuing kickoff, with Colby Langley stripping the ball from the Cougars’ return man and Jarret VanFossen pouncing on the ball for the fumble recovery.

The next Cougar drive ended when Redskins’ Hunter Parks intercepted a Schmidt pass.

Crock then took the snap and scampered 85 yards for a touchdown and although the two-point conversion attempt failed, Caldwell led 48-7 with 1:17 left in the game. 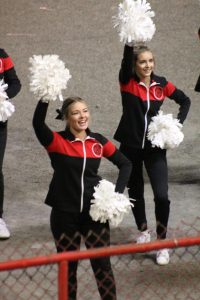 Bender completed 7-of-11 passes for 138 yards and three touchdowns. Sayre caught two tosses for 55 yards and a touchdown; Wheeler had two grabs for 37 yards and a TD, Crock had two receptions for 16 yards and Herlan had one for 32 yards and a TD.

The Redskins’ defense was led by Wheeler with six tackles followed by Langley and Jeffery Guiler with five each.

Frontier had 214 total yards, including 152 passing and 65 rushing.

Schmidt was 14-of-26 for 152 yards with one TD and one interception. His leading receiver was Bills with 13 catches for 142 yards and one touchdown. The Cougars’ rushing leader was Schmidt with eight carries for 58.

“We have seen some clips of Newark Catholic,” said Coach Rucker. “They are pretty much all air raid, spread offense. They have a good quarterback and good receivers. We have to step up with the secondary and get ready to rock and roll with them.”