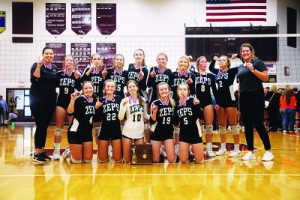 Back to the “Sweet Sixteen”!!

The top-seeded Shenandoah Lady Zeps were on a mission and it was “mission accomplished” after Saturday’s three-set sweep of sixth-seeded Strasburg – 25-20, 25-21, 25-14 – in the OHSAA Division IV District Championship at John Glenn High in New Concord on Saturday.

The Lady Zeps will be looking for some payback as it was Newark Catholic which ousted SHS in the regional championship match two years ago – 25-14, 25-19, 25-15. 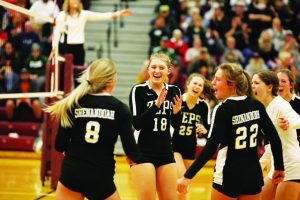 “We started each set a little slow, but we recovered quickly, she said, referring to early set deficits against Strasburg. “We knew we’d have to be ready to compete, and I’m proud of my girls because they showed a lot of mental toughness.

“I thought we played well all around today,” added the Zeps’ coach. “We have girls in back row, setters and girls in front row who all do their job and that’s what you have to have at this point.” 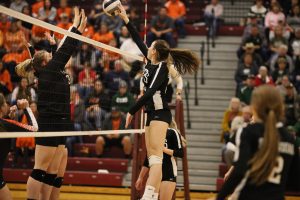 Strasburg again led early at 3-0, but the Zeps got even at 4-all and it was just a matter of time as the lead ballooned to double-digits – the largest at 23-11 – before the sweep concluded with a 25-14 win.

Mya Leach led the Lady Zeps at the net with a dozen kills while Brylee May had eight and Charli Wickham had seven. 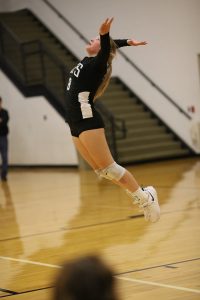 Shenandoah reached the finals with a four-set victory against fourth-seeded Tuscarawas Central Catholic – the team that eliminated the Lady Zeps in last year’s district semis – winning by 25-20, 28-30, 25-18 and 25-12 scores.

“We knew they would play us tough,” said Coach Grywalski, “They hit, but our back row really stepped up.

“We took some swings and made them respect that,” she said, “and then when we tipped it they were on their heels.”

Leach turned in a strong effort at the net with 22 kills followed by Klara Anderson with eight; Wickham with seven; and McVicker and Brown with five apiece. 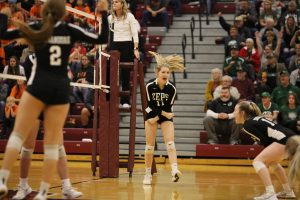 Sherman led SHS with 26 assists while Merry had 19 and Leach had four service aces.

Leach also led the defense with 25 digs followed by Wikander with 12; Sherman and Noll with 10 each and Merry with seven. May was charted with five blocks and Anderson had two. 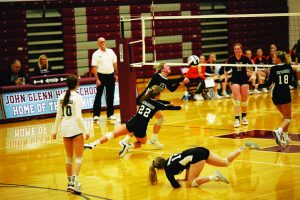