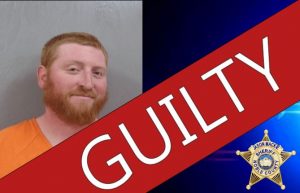 Noble County Sheriff Jason Mackie announced that Tyler Thompson, age 28 of Belle Valley, was found guilty by a jury of his peers on November 10, 2021 of Aggravated Murder, Murder, and Felony Murder, with each charge containing a firearm specification, as well as a charge of Tampering with Evidence. The jury trial began on Monday, November 8 stemming from an indictment by the Noble County Grand Jury on April 14, 2021. Thompson was originally charged following an investigation into the shooting death of Leah Brooke Hines, age 27 of Belle Valley.

Thompson, represented by Attorney Samuel Shamansky, had previously entered a plea of Not Guilty and was being held without bond pending his trial set to begin on November 8. Thompson’s charges were pursued by Noble County Prosecutor Jordan Croucher and Special Prosecuting Attorney James Lowe of the Ohio Attorney General’s Office. After the presentation of closing arguments and jury instructions on November 10, the jury deliberated and ultimately returned verdicts of guilty on all charges and specifications. Following a reading of the jury’s decision, Noble County Common Pleas Judge Kelly Riddle remanded Thompson to the custody of the Noble County Sheriff’s Office where he is currently being held awaiting his sentencing hearing set for 1:30 p.m. on November 22.