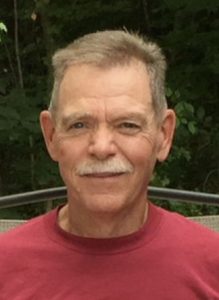 George M. Zwick, 74 of Stafford, Ohio a beloved husband, father, and grandfather entered into God’s kingdom on November 14, 2021, after a 42 day battle with Covid-19.

George was born to Clawrence and Juanita (Camden) Zwick, of Marr, Ohio, on May 12, 1947. He was the eighth of 12 children. As a young man, George worked on the family dairy farm and enjoyed playing basketball. He attended Skyvue High School, where he was recognized for scoring over 1,000 points during his basketball career. Shortly after he graduated in 1965, he joined the US Air Force and served a tour in Vietnam.

After returning from Vietnam, he lived and worked in San Francisco, where he proudly became a father to his son, Monte. After returning to Ohio, he worked for the Ohio Department of Transportation, from which he eventually retired.

On July 14, 1995, he married his true love, Kay, and they moved to Stafford, Ohio with their three children, in a home that was built mostly by George and his extended family.

George and Kay have enjoyed many years as avid members of the Stafford United Methodist Church. They have also enjoyed several vacations and becoming grandparents together. When George wasn’t involved with his church or family, he could be found golfing, woodworking, hunting, or walking their cherished dog, Sophie. As an active member of his community, George was known and admired by many. He didn’t know a stranger and was always ready to lend a helping hand, an encouraging word, or a kind smile.

George was preceded in death by his parents, infant brother, Patrick, and parents-in-law, Del and Betty Lewis.

Friends will be received 2-4 and 6-8 p.m. Friday November 19, 2021 at the Bauer-Turner Funeral Home Woodsfield, Ohio where funeral services will be held at 1 p.m. Saturday with Pastors Jim Porter and Terry Schmelzenbach officiating.  Interment will follow at the Stafford Cemetery with full military honors.  In lieu of flowers, memorial contributions may be sent to Stafford UMC at P.O. Box 387, Stafford, Ohio 43786.