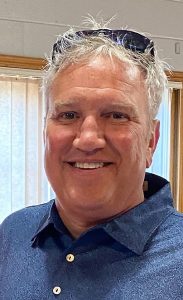 Michael J. Crum age 56, of Caldwell, Ohio passed away Thursday, November 25, 2021 at the Marietta Memorial Hospital in Marietta, Ohio. He was born May 5, 1965 in Athens, Ohio, a son of Audrey M. Butler Crum and the late James A. Crum.

He was a 1983 graduate of Caldwell High School and went on to earn a bachelor’s degree from Ohio University. He was the owner and operator of Crum & Richards Insurance Agency. He was a member of the St. Stephen Catholic Church in Caldwell and the Knights of Columbus Council #2565. He was an avid Notre Dame fan.

His life centered around his family and all the youth of his community, whether it be supporting the kids at the fair buying their animals or cheering them on from the sidelines. He had coached soccer, baseball, football, basketball, umpired sporting events, and most recently was a Shenandoah assistant baseball coach. There were few games at Shenandoah or Caldwell he couldn’t be spotted at with his go-to visor and words of encouragement for the athletes and coaches. In losing Mike, the youth of the community truly lost one of their biggest fans.

In addition to his father, he is preceded in death by his father-in-law Richard D. Hesson.

Those left to cherish his memory are his wife Amy L. Hesson Crum whom he married April 6, 2001; two children, Hannah and Jacob Crum; bonus son Tanner Clark of Caldwell; mother Audrey M. Crum of Caldwell; siblings Daren (Holly Gray) Crum of Norwich, Ohio, Karen Halasi of Canton, Ohio, and Stacey (Peter) Patton of Westerville, Ohio; mother-in-law Connie A. Hesson of Dexter City, Ohio; his nieces and nephews who were very special to him  Haley Crum, Jordan Halasi, Derek Crum, Ryan Halasi, Alex Halasi, Luke Patton, Nick Patton, C.J. Patton, Nikki Schott, Leann Clark, Darren Hesson, Allison Hesson, Megan Hesson, and Alex Herlan; brothers-in-law and sisters-in-law Michael (Jennifer) Hesson of Dexter City, Mark (Melissa) Hesson of Beverly, Ohio, and Cheryl (Joe) Herlan of Dexter City; also great-nieces and great-nephews. He will also be missed by many friends and so many kids that he viewed as his own and cheered them on in everything they did.

The family will receive friends for visitation Monday, November 29, 2021 from 2:00 p.m. to 8:00 p.m. at the Chandler Funeral Home, 609 West Street, Caldwell, Ohio with a vigil service to conclude the visitation at 8:00 p.m. A Mass of Christian Burial will be celebrated on Tuesday, November 30, 2021 at 10:00 a.m. at the St. Stephen Catholic Church, 1036 Belford Street, Caldwell, Ohio 43724, with Rev. Father Dale Tornes and Rev. Father Wayne Morris serving as concelebrants. The public is invited to view the Mass live on the St. Stephen Catholic Church Facebook page. Burial will follow at the St. Michael Catholic Cemetery in Carlisle.

In lieu of flowers, memorial contributions may be directed to be used to help the youth in need in our community c/o Chandler Funeral Home. Please join us in remembering Mike by visiting his memorial site at www.ChandlerFuneralHome.net.