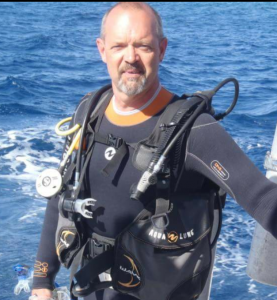 Douglas K. Crock, age 53 of Concord Township, Ohio, passed away Saturday, November 27, 2021 at UH Geauga Medical Center in Chardon, Ohio. He was born March 12, 1968 in Cambridge, Ohio, a son of Ken and Donna Arnold Crock.
Doug was a graduate of Caldwell High School and attended Bowling Green State University. He worked for 30 years in environmental construction, most recently with Shook Construction as a superintendent. He worked on various structures around the Cleveland area including the air traffic control tower at the Cleveland Airport, Kirtland Pump Station and the Cleveland Browns Stadium.
He is preceded in death by Jake the Dog, Tyler the wonder Dog (Einstein) and Roxanne the cat.
Those left to miss him dearly are his wife Karen Crock (nee Colosi) whom he married August 2nd 2013; his parents Kenneth and Donna Crock (nee Arnold); his sister Sandra Linville (nee Crock); nephew Dylan Linville; niece Kylee Linville; step daughters Rachael Bledsoe (Ron) and Katherine Bateman; grandchildren Colin Bledsoe and Kendal Bledsoe; as well as aunts, uncles and cousins of the Crock and Arnold families.
Doug loved spending time with family and friends, was an avid scuba diver – on his 50th birthday, he went Scuba diving in the Red Sea – OSU football and Cleveland Indians Fan (I know they changed their name but Doug wasn’t on board).
The Crock family would like to invite you to Doug’s memorial mass at 10 a.m. on Saturday, December 11, 2021 at St. Mary of the Assumption Church, 8560 Mentor Ave., Mentor. A Rosary prayer will precede the memorial mass at 9:30 a.m. Masks are required at church.
Donations may be made in Doug’s name to 4Ocean.com.