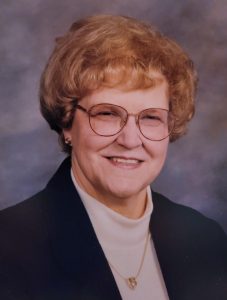 Vera Lowene Hayes, age 84, of Caldwell, Ohio, died Wednesday, December 1, 2021, at St. Ann’s Hospital in Westerville. She was born June 8, 1937, in Noble County, daughter of the late Lawrence E. “Pete” and Olive R. Parker Willey. Lowene was a 1955 graduate of Forest Grove High School, where she was valedictorian of her class. During high school, she worked for Dairy Queen, and for a time she worked for Carl’s Shoes, both in Caldwell. She retired from Hayes General Merchandise on the square in Caldwell. She was a member of the First Church of Christ and the Noble County Quilt Guild, and she was a volunteer docent for the Ball-Caldwell House. Lowene was an avid quilter and embroiderer. She loved gardening and keeping her backyard pristine. Her yard was a sanctuary for both her and her husband, Claire, where she kept bird houses, bird feeders, and butterfly houses and tended a variety of flowers, plants and shrubs. She was devoted to her family.

In addition to her parents, she is preceded in death by her husband, Claire E. Hayes, whom she married October 14, 1956, and who died August 6, 2011; and one sister, Lois Marie Willey.

Friends may call Friday, December 3, 2021, from 4-8 p.m. at McVay-Perkins Funeral Home, 416 East Street, Caldwell, where the funeral service will be observed Saturday, December 4 at 11 a.m. with Pastor Brent DeWees officiating. Burial will follow at Olive Cemetery. Memorial contributions may be made to the Caldwell Volunteer Fire Department, 215 West Street, P.O. Box 24, Caldwell, Ohio, 43724, or to the First Church of Christ, 601 North Street, Caldwell, Ohio, 43724. An online guestbook may be signed at www.mcvay-perkins.com.