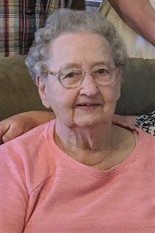 Avenell Wharton, age 92, of Macksburg, Ohio, died Saturday, December 25, 2021, at her home. She was born December 10, 1929, in Noble County, daughter of the late Lawrence and Lulu Fern Porter Woodford. Avenell was a 1947 graduate of Caldwell High School. She was employed at Summit Acres Nursing Home and Noble Products in Caldwell, and she worked as a seamstress. She was a member of the First Presbyterian Church in Caldwell, where she served as an elder and deacon. She was also active in the Sunday School program and took care of the nursery for years. At one time, she served as a 4-H advisor.

Friends may call Wednesday, December 29, 2021, from 4-8 p.m. at McVay-Perkins Funeral Home, 416 East Street, Caldwell, where the funeral service will be observed Thursday, December 30 at 11 a.m. with Ken Perkins officiating. Burial will follow at Dudley Cemetery. Memorial contributions may be made to the First Presbyterian Church, 532 North Street, Caldwell, Ohio, 43724, or the Hospice of Guernsey at www.hospiceofguernsey.com.  Guests are asked to practice recommended safety precautions against Covid at all gatherings. An online guestbook may be signed at www.mcvay-perkins.com.