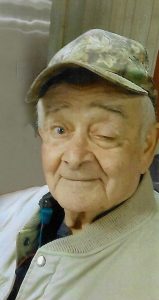 Virgil worked in the Carpenter’s Union early in life.  He was the owner of Rush Logging and timbered most of his life.  He was a trustee for Seneca Township and later worked for Beaver Township.

Virgil loved the outdoors, especially camping and fishing.  With his quick wit and humor, he was not just the life of the party – he was the party.

In addition to his parents, he was preceded in death by sisters Hildred Mareno and Barbara Lucas and brothers Samuel Loren Rush and Damon Rush.

Friends will be received from 2-8 p.m. Sunday, January 9 at the Bauer-Turner Funeral Home 100 S. Paul St. Woodsfield, Ohio where funeral services will be held at 11 a.m. Monday, January 10, 2022 with Don Thompson officiating.  Burial will follow in the Calais Cemetery Calais, Ohio.

In lieu of flowers, memorial contributions can be made to a charity of your choice.