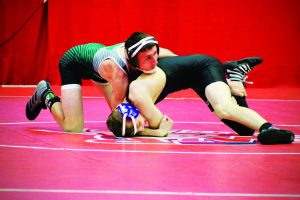 After a year hiatus due to COVID-19, the OVAC Ron Mauck Wrestling Championships returned in full force with team and individual champions crowned at the end of three days of competition Saturday night at WesBanco Arena in Wheeling.

Wheeling Park stood atop the overall and Class 5A team standings while the other division winners were Beaver Local in Class 4A; Barnesville in Class 3A and Cameron in Class 1A/2A.

Finishing in seventh place were junior Drake Kanyuch of Shenandoah at 132 pounds and junior Marshal Sayre of Caldwell at 170. 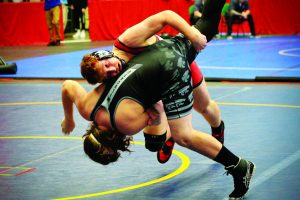 CHS junior Marshal Sayre deposits his opponent on the mat during the OVAC Ron Mauck Wrestling Championships. Sayre was the only Redskin to reach the podium, finishing in seventh place in the 170-pound weight class.

Sayre, the No. 5 seed, posted a 4-1 record in the tournament to improve his season mark to 21-4 overall.

Shenandoah finished third as a team in Class 3A with 62 points while Caldwell was fourth in Class1A/2A with 27 points.

A host of special awards were presented throughout the event, headed by the naming of two Mr. Mat award recipients – Pete Cuffaro (2021) and Jeff Crosier (2022).

Shenandoah joins Shadyside in a triangular at Martins Ferry on Tuesday at 5:30 p.m. while Caldwell takes part in the River Invitational on Saturday.