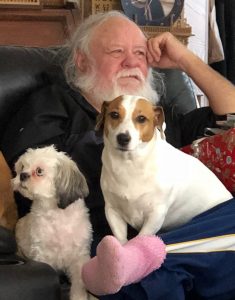 Randolph “Scottie” Presnell, 71 of Choteau, passed away January 27, 2022 at Benefis Hospital in Great Falls after a battle with illness.

Scottie was born September 28, 1950 in Banner Elk, North Carolina to Jasper and Maggie (Grey) Presnell.  He was raised in Beech Creek, North Carolina until he was a teenager and he and his family moved to Caldwell, Ohio. He attended and graduated high school with the class of 1968.

Following graduation Scottie joined the United States Marine Corps on November 18, 1968 where he was a Marine Sniper. He was honorably discharged March 1, 1975. He married Kathy Presnell in 1969 and they were married for 25 years.

Scottie re-enlisted in the United States Army on March 22, 1977 and was in the Army Security Forces until his honorable discharge May 16, 1989.  Scottie was stationed in Germany, Hawaii, Texas and North Carolina and did three tours during the Vietnam War. During his service Scottie was awarded the Army Commendation Medal, the National Defense Medal, four Army Good Conduct Medals, two Marine Good Conduct Medals, a Vietnam Campaign Medal and a Vietnam Service Medal. Along with his military service Scottie also worked as a school bus driver and a long-haul trucker.

After Scottie’s terms of service, he moved back home to Caldwell, Ohio. In 1994 Kathy and Scottie separated and he eventually met and married Shirley Presnell.  In 2011 Scottie separated from Shirley and moved to Great Falls, Montana. On June 7, 2014 Scottie married Anita (Howard) Presnell and they were happily married for eight years. In 2015 the couple bought a house and moved to Choteau, Montana.

Scottie loved fishing, hunting and camping. He enjoyed riding his Harley until balance problems made it impossible and he switched to 4-wheelers. Above all else Scottie loved his family. He loved to spend time with his family and especially enjoyed telling off-color jokes or stories to embarrass his loved ones.

Scottie was preceded in death by his parents Jasper and Maggie Presnell and his younger brother Mickey Presnell.

Condolences may be left on-line at www.gorderjensenfuneralhome.com