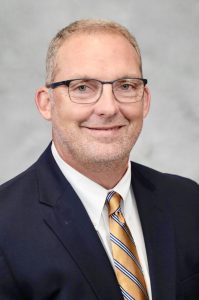 In just nine short years, he put a tiny, rural school district on the map throughout the region, the state and even the nation.

He brought energy and enthusiasm which spread throughout the administration and staff.

He even weathered the storm of COVID-19 and kept things moving in a positive direction.

Simply put, Dan Leffingwell has made things happen as Superintendent of the Noble Local School District.

After taking Noble Local to new heights, however, Leffingwell has decided to accept a new challenge.

“I am resigning my position as Noble Local Schools Superintendent effective July 31, 2022 pending March approval by the East Central Ohio Educational Service Center Board where I will be employed as an Executive Director of Special Projects and Student Services,” said Leffingwell.

“This is certainly not a decision I make lightly,” he continued. “I am extremely proud of the work our Noble Local team has accomplished over the past nine years and am certain our district will  continue to grow and excel because of the expectations and vision we have all worked collaboratively to create.”

While he may have been the “go-to guy” at Noble Local, Leffingwell quickly shared the praise and offered plenty of thank-yous, starting with the NLSD School Board.

“Beyond our staff as a whole, I am so appreciative of our Board of Education,” said Leffingwell, who recently was named the 2022 Ohio Superintendent of the Year by the Buckeye Association of School Administrators (BASA), “not only for their unwavering support, but also for their willingness to embrace necessary change in an effort to best prepare our students for their futures which we know will be drastically different than our experiences.

“To do this, we often say ‘we don’t just think outside the box…we’ve gotten rid of the box entirely!’” he continued. “This Board comes to the table each month with no agenda other than creating hope, access and world class opportunities for our students. I could not be more appreciative!”

“I have been truly blessed to serve the Noble Local community, its students and their families for the past nine years,” he offered. “We have so much to be proud of with much left to accomplish.  This district, thanks to a strong community and staff who always places its students as their highest priority, is poised for even bigger and better things in their future. I cannot wait to watch their future growth and transformation!

“Though leaving is bittersweet for sure, I am excited to begin my next chapter and join an already outstanding ECOESC team in service of their member districts and beyond,” said Leffingwell. “I look forward to the opportunities we have to work collaboratively across the entire region in an effort to help students prepare for their futures.”

Leffingwell, like every school administrator nationwide, had to deal with the COVID-19 pandemic, but he feels Noble Local has not only survived, but thrived under the challenges it presented.

“Many would point to dealing with COVID and related protocols as our greatest challenge,” he said. “Oddly, however, I feel the response of our staff, students and families actually became our greatest victory. Our ‘team’ responded swiftly and effectively even though we were clearly navigating uncharted territory. As a result, our ‘darkest hour’ became our greatest. We have made so much progress as a result of being forced from our comfort zone to deliver instruction in ways we may have never considered otherwise.”

What does he see as the biggest challenge for education going forward?

“I truly believe our greatest challenge still lies within our profession where many still resist change and transformation necessary to prepare our students for their futures,” he related.    “We’re 22 years into this century and we still struggle to engage students differently given their futures will be drastically different from our experiences of the past. Our profession needs to be more proactive rather than reactive. We need to be more ‘anticipatory’ to best serve our primary customers – the students and our business/industry partners.”

During his time at Noble Local, Leffingwell has worked tirelessly to create hope, access and opportunities for all students in a rural district that covers 289 square miles without a stoplight.

The district is now a branch campus for Zane State College, offering in excess of 125 semester hours of college credit on the Sarahsville campus; PreK offerings have been expanded from 19 students in 2013 to now serving 126; and all students have access and are engaged in robust STEM activities preparing them for a career of their choice. Both Shenandoah High School and Shenandoah Elementary/Middle School received the Ohio Department of Education’s STEM designation, the only school in the region to have that distinction.

A few other “highlights” include the state-of-the-art playground at Shenandoah Elementary; the fitness center adjacent to the high school gymnasium and countless renovations campus-wide along with the ongoing construction of the “Green Acres’ farm complex and the soon to begin project of a new bus garage.

Speaking on behalf of the Noble Local Board of Education, President Ed McKee offered the following thoughts:

“As a board, we always knew this day would come,” said McKee. “Dan came to our district and his feet haven’t hit the ground since he got here.

“His ability to communicate…his vision….and passion to provide hope and opportunities for kids   in today’s challenging world are unmatched,” he continued. “He’s always listening and he has always been transparent with the board which allowed us to work collaboratively.

“They will certainly be hard shoes to fill,” McKee added, “but while change is hard, it can sometimes be a good thing. We just have to find the right person and with Dan’s help, we feel confident that will happen.”

“His passion is to have an impact on the kids and with this new position, he’ll continue to have that opportunity,” offered McKee, “so we certainly wish him well going forward.”

Shenandoah High School Principal Justin Denius, who has been part of the NLSD Administrative Team throughout Leffingwell’s tenure, was caught somewhat by surprise at the announcement.

“In his nine years here, he’s changed the way we do business and the way we think and he’s left our school district better than he found it,” said Denius. “That’s always been one of my goals as well.

“When he came here, I gained somebody who had been a principal for 20 years previously as a mentor and  I’ve learned a lot from him, so I’m very appreciative of that,” he continued. “I hate to see him go because our team is fantastic, but I’m happy for him at the same time.
“He’s definitely put us on the map and in doing so, he’s raised the game for all kids in Appalachia because they’ve seen that if Shenandoah can do it, they can, too,” Denius added.    “He’s definitely changed Noble Local for the better and he should be very proud of that, and with his new position he can have an even bigger regional and state influence going forward.”

Denius feels Leffingwell’s ability to get everyone working together has been key to the district’s many successes.

“It’s a testament to his ability to get people on the same page and rowing in the same direction,” he said. “When that happens, big things can happen. We don’t plan on slowing the train down as there are several ongoing and plans for the future in place.

“Over the last nine years, I got to learn from the best,” Denius concluded, “and I also gained a friend for life.”
—

Not surprisingly, Randy Lucas – the Superintendent of the East Central Ohio Education Service Center which serves school districts in Tuscarawas, Belmont, Harrison, Carroll and Guernsey counties – is excited to have Leffingwell coming aboard in the fall.

“With his proven track record at Noble Local, we look forward to him being a part of our team,” said Lucas. “His passion for workforce development and his expertise there, his relationships with the business community and being this year’s state Superintendent of the Year…he checks off so many boxes and brings so much to the table.

“Our grants and projects continue to grow,” he added, “and having Dan with us will definitely allow the ECOESC to offer more opportunities to the districts we serve.”

During his nearly 34-year career in education, Leffingwell has served as a teacher, coach, principal and superintendent, providing an experienced perspective on district operations. He is an active member of CORAS (Coalition of Rural and Appalachian Schools), Ohio Appalachian Collaborative, served as Assistant Director of OSRC (Ohio Small Rural Collaborative), JASON Learning STEM consortium, SOAR collaborative and the Noble County CARES program (the county’s addiction task force).
Prior to coming to Noble Local, he spent 15 years (1998-2013) as high school principal at Warren Local.

In the athletic realm, he had a variety of teaching and coaching experiences beginning in 1988, first serving two years as assistant men’s basketball coach and head golf coach at Marietta College. He then was named head boys’ basketball coach at Warren Local in 1994 and during his five years, the team was district runner-up twice. He was named SEOAL Coach of the Year twice and was the Southeast District Coach of the Year in 1998.

He also previously served on the Ohio Valley Athletic Conference Executive Board.

Leffingwell graduated from Marietta College with a BA in English in 1988 and earned his MA in Educational Leadership from Ohio University in 2000. Dan and his wife Debbie have been married for 32 years and have two children – Darci (30) and Dylan (27).