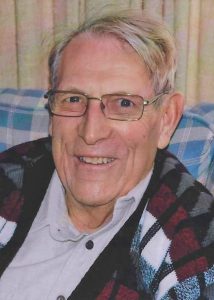 Laurence T. Hountz, age 96, of Caldwell, Ohio, formerly of Macedonia, died Saturday, March 5, 2022, at Altercare Summit Acres in Caldwell. He was born July 12, 1925, in Sunman, Indiana, son of the late Edward and Marie Dickman Hountz. Laurence was a United States Navy veteran, having served during World War II aboard the USS Saratoga in the Pacific and Indian Oceans. He retired from the Ford Motor Company at their Walton Hills Stamping Plant where he was a skilled tradesman. He was a member of St. Stephen Catholic Church in Caldwell. He enjoyed walking, gardening, fishing, reading, and traveling, and kept busy all the time. He was a kind and gentle man.

In addition to his parents, he is preceded in death by his wife, Betty R. Flaspohler Hountz, whom he married May 29, 1948, and who died January 7, 2019; a son-in-law, Joseph E. Snider; two sisters, Irene Eckstein and Dolores Allen; and one brother, Edward Hountz.

Inurnment will take place at a later time at Mt. Olivet Cemetery in Caldwell. Memorial contributions may be made to St. Jude’s Children’s Research Hospital at www.stjude.org. McVay-Perkins Funeral Home in Caldwell is caring for the family. An online guestbook may be signed at www.mcvay-perkins.com