Noel McFarland: The Barber on the Square

Noel McFarland, affectionately known around Noble County as ‘The Barber’, reflected on his life one day last week as we chatted and enjoyed coffee and Girl Scout cookies.

Noel, who grew up on a farm in Noble County and has worked as a barber in his shop on the Square in Caldwell for just short of 60 years, knows just about everyone in the county. And he’s cut a good percentage their hair.

Sitting in the Journal we watched an Amish fellow stroll by outside the window, and Noel recalled that growing up on the farm at Crooked Tree near Macksburg wasn’t very different in what people like to think of as ‘the good old days’ to how the Amish live today.

“We had electric, but that was it,” he said. Like many farm kids, Noel and his slightly older brother, Neil, got up early enough to do their chores, including milking the cows, before eating a hearty breakfast and catching the bus for school. Their mother, Edith, taught school for 40 years, and their father, Delmar, farmed.

The farm life wasn’t for either brother, and both, upon graduating from high school, headed up to Akron to attend barber school. Noel , who graduated from Dexter City in 1956, didn’t have a car so he rode a Greyhound bus up to Akron, where he attended barber school, graduating in 1957.

Upon graduation from barber school, Noel hopped back on the Greyhound, this time headed for home. He got a job with a barber working in the basement of what is now the Peoples Bank building. He stayed there for six months before heading back north on the Greyhound to take a job in a three-chair barbershop in Akron where his brother was working. He stayed there until an exciting opportunity opened up when a new shop with six chairs opened in a brand new shopping center. He took the job and stayed there until he decided to return to Caldwell in 1964.

“When I got back here in ’64 there were nine barbers working on the square! I bought my shop from Henry Bond. The shop had been operating as a barber shop in the same location for 100 years, although the building was replaced some time ago. Henry started out in the old wooden building that was here before he replaced it with the brick building I bought when  I was 26.”

Noel has operated that shop ever since, for 58 years. His daughter, Lisa Shaw, has a beauty parlor, Hair on the Square, in half of his building.

Noel has many interesting stories of life in Noble County, and he loves to talk to people. He served for many years as a fireman with the Caldwell Fire Company, and is now an honorary firefighter.

He was inducted into the Noble County Basketball Hall of Fame to honor him for being manager of the Dexter City team when he was in school.

He’s cut the hair on some interesting people, among them serial killer Thomas Dillan while he was a resident of the Noble County Jail, now the Historic Jail Museum on the square.

He has an autographed photo of country music star Connie Smith, whom he went to grade school with, hanging on the wall of his shop. He plans to take that home where he can enjoy looking at it.

Due to medical problems which have made it difficult to keep working, Noel has decided to retire.  His daughter will continue to operate her salon in his building. And Noel will continue to enjoy visiting with all the folks he calls friends here in Noble County.

“I want to thank the people who’ve been to my place. They’ve always been good to me,” Noel said.

Be sure to look him up and sit down to chat for a bit. He’s sure to have a good tale to tell. 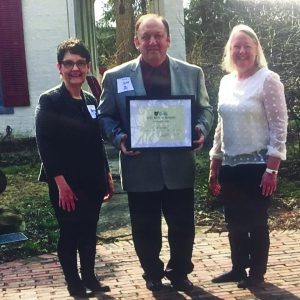