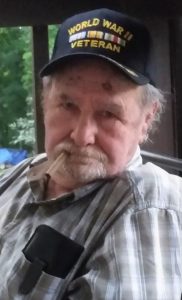 Russell L. Johnson, age 94, of Caldwell, Ohio, died Monday, March 21, 2022, at Doctor’s Hospital West in Columbus. He was born May 23, 1927, in Sarahsville, son of the late Walter and Ocea Kirkbride Johnson. Russell was a United States Marine veteran, having served during World War II in the Caribbean.  He retired as a tool and die maker from the Gould plant in Caldwell following 38 years of service and he did electrical work and small engine repair from his home. Russell enjoyed collecting carbide lights and teaching people how to light them. He was a storyteller and conversationalist who enjoyed sharing about the good old days. He was devoted to his children, grandchildren, and great-grandchildren, and loved going to their sporting events.

In addition to his parents, he is preceded in death by his wife, Rosa A. Everly Johnson, who died September 2, 2014; one son, Mancel R. Johnson; one granddaughter, Sonia K. Johnson; a son-in-law, George A. Morgareidge; and one sister, Verna McClellen.

Friends may call Friday, March 25, 2022, from 2-8 p.m. at McVay-Perkins Funeral Home, 416 East Street, Caldwell, where the funeral service will be observed Saturday, March 26 at 11 a.m. with Jason Pierce and Ken Perkins officiating. A veteran’s graveside service will be observed at Village View Cemetery conducted by the Noble County Veteran Service Organizations. An online guestbook may be signed at www.mcvay-perkins.com