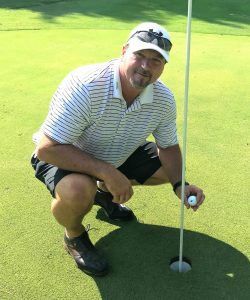 Kevin Dale Stephen age 59, of Caldwell, Ohio went to be with the Lord to his heavenly home Friday, March 25, 2022. He was born April 15, 1962 in Barnesville, Ohio a son of Shirley Christman Stephen of Caldwell and the late Dale Stephen.

He was a 1980 graduate of the Shenandoah High School where he was a multisport athlete. He was a member of the Harborsite Baptist Church in Marietta. He retired from Hi-Way Paving Inc. following 37 years of service. He enjoyed golfing, farming, playing cards, working on crafts, and his horses. He was an avid Ohio State Buckeye supporter. He was a loving son, brother, husband, father, and grandfather who was always first in line at every event. He could always be spotted in the crowd with support for his children and grandchildren. Kevin will fondly be remembered as always saying “Yes” when asked for help from anyone, family or friend. He was always one call away for anyone.

In addition to his mother, those left to cherish his memory are his wife Shila D. Forshey Stephen, whom he married November 14, 1981; two children, Kristen (Brent) Long and Jedidiah (Katie) Stephen all of Caldwell; grandchildren Chesne, Beckett, Rhian, Allie, and Kolton; siblings Donna (Tim) Boyd of Caldwell, Denise (Jim) Wells of Caldwell, Lisa (Larry) Cowgill of Sarahsville, Ohio, and Jason (Jennifer) Stephen of Cincinnati, Ohio; father-in-law and mother-in-law Carl and Sue Forshey of Green Cove Springs, Florida. He is also survived by many nieces, nephews, and friends.

The family will receive friends for visitation Monday, March 28, 2022 from 3:00 to 8:00 p.m. at the Chandler Funeral Home, 609 West Street, Caldwell, OH 43724. A funeral service will be held Tuesday, March 29, 2022 at 11:00 a.m. in the Chandler Funeral Home Chapel with Rev. Donald Arbuckle and Rev. Scott Kapple co-officiating. Burial will follow in Olive Cemetery in Caldwell. Memorial contributions may be made in Kevin’s honor to the Stephen Family c/o Chandler Funeral Home to benefit the Shenandoah and Caldwell Athletic Programs. Please join us in remembering Kevin by visiting his memorial at www.ChandlerFuneralHome.net