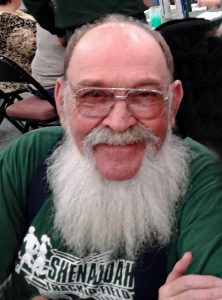 Harry Carl Slevin age 66, of Fredericksdale, Ohio passed away Thursday, April 14, 2022 at his home. He was born June 4, 1955 in Noble County, Ohio, a son of the late Kenneth and Mabel Mayberry Slevin.

He was employed for many years in the oil fields. He was a member of the St. Mary of the Immaculate Conception Catholic Church in Fulda, Ohio, where he served and was active as an officer in the Usher’s Club, Parish Council, and in the men’s prayer groups, He was a 4-H Leader for 30 years as well as on the 4-H Council.  He loved attending the grandkids’ sporting events and riding his Honda Gold Wing. He could often be found sitting on the porch or doing his woodworking.

In addition to his parents, he is preceded in death by a brother James Edward Slevin; nephew Darren Slevin; niece and great-nephew Janice and Colton Bayly; great-niece Kayla Hanson; and brother-in-law Donnie Oliver.

The family will receive friends for visitation Tuesday, April 19, 2022 from 2:00 to 8:00 p.m. at the Chandler Funeral Home, 609 West Street, Caldwell, OH 43724, with a Rosary Service held at 8:00 p.m. A Mass of Christian Burial will be held Wednesday, April 20, 2022 at 10:00 a.m. in St. Stephen Catholic Church in Caldwell, with Rev. Father Wayne Morris and Rev. Father Chester Pabin serving as concelebrants. Burial will follow the funeral meal in St. Mary’s Catholic Cemetery in Fulda. Please join us in remembering Harry by visiting his memorial at www.ChandlerFuneralHome.net