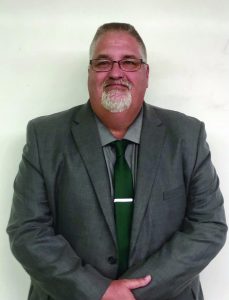 There’s a new conductor of the train that is the Noble Local School District.

Herman – a 1988 graduate of Indian Valley North High School – received his Bachelor’s Degree in Education and Teaching from Kent State University in 1997 and his Master of Education in Educational Administration from Salem International University in 2010.

He started his career in education as a history teacher in the Indian Valley Local School District (1997) and then at River View High School (2003-2012). He coached several sports at various levels while at Indian Valley and was the head boys’ basketball coach at River View for three years during his time there.

Herman served as Principal of Conotton Valley High School for three years (2012-2015) before being named Superintendent of the Conotton Valley Union Local School District in 2015.

“I’m very excited about the opportunity, said Herman. “Noble Local has a lot of things in place that are a shared passion – career tech, early education and character building – those are things I tried to make a priority at Conotton Valley.”

Herman also shares the current NLSD vision of how education has changed in recent years.

“The education world has changed in the last decade,” he said, “and our job is to give every student what they need to reach their fullest capacity and fulfill their dreams. Whether that’s going to college or career tech or straight into the workforce, every one of them needs to think critically, problem solve and interact with their fellow employees.

“I echo the thoughts of Mr. Leffingwell that everybody should end up with a j-o-b,” he added.

Herman feels his first year at Noble Local will be spent becoming familiar with everyone in the district as well as getting up to speed on projects that are already in place.

“I’m not coming in looking to change things,” he said, “We all want it to be a smooth transition.

“My first priority is getting to know the employees, students and community members,” Herman continued. “I’m big on building relationships and getting the lay of the land to see where we are and the goals that have already been established.

“I’m looking forward to working with the board, the entire administration team and the Business Advisory Council,” he added.

Herman also offered his appreciation to the Conotton Valley community for their support during his 10 years there.

“I’m very appreciative of all the support from the staff and community at Conotton Valley,” he stated. “It’s been a great 10 years and I think we’ve changed the culture there, and to be part of the (multi-million dollar) Rocket Center project has been amazing.”

Speaking on behalf of the Noble Local Board of Education, President Ed McKee said the choice was a difficult one but that the board looks forward to working with Herman.

“We had two very good candidates – one in house and one with more experience,” said McKee, “and experience won out at the end. We deliberated at length because we faced a very difficult decision.

“We’ll maintain the path that we’re on with Todd leading the way,” he continued. “He’s got experience with constructing new facilities and has been involved in several committees with Dan (Leffingwell) in recent years.

“There’s a silver lining with everything and we’ll find it, I’m sure,” McKee added.

Herman succeeds Dan Leffingwell, who announced he will resign as the NLSD Superintendent on July 31 to assume the position of Executive Director of Special Products and Student Services at the East Central Ohio Educational Service Center which serves school districts in Tuscarawas,Belmont, Harrison, Carroll and Guernsey counties.

“As I’ve said before, my leaving is certainly bittersweet,” said Leffingwell. “I’ve enjoyed my time at Noble Local and look forward to watching the district continue to move forward.

“I’ve gotten to know Todd Herman and I trust that above all, they’re employing a terrific person and one who is capable of providing great leadership in the future,” he related. “We have an outstanding team in place and many great things are planned for future growth and improvement.

“I’m confident Todd can blend well with the group already assembled and help take the next step from good to great,” he added.