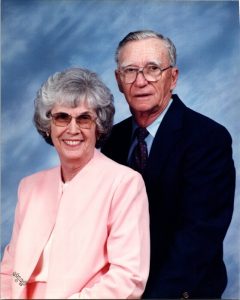 The late Bill and Linda Arick

William “Bill” R. Arick, 92, of Quaker City, Ohio passed away on Friday, May 13, 2022 at Southeastern Ohio Regional Medical Center. He was born in Quaker City on November 30, 1929 to the late Henry G. and Grace Adeline (Graham) Arick.

Bill was an Army veteran and a Methodist by faith.  Bill was the manager of the Shell and Texaco in Barnesville and later retired from Producers Livestock.  He loved spending time outside and being with his children, grandchildren and great-grandchildren.

In addition to his parents, Bill was preceded in death by his wife of 63 years, Linda Arick on May 20, 2020; son Alan Arick; brother, Jacob Arick; and five sisters: Kathleen Wittenbrook, Lois Perkins, Vivian Gallagher, Patricia Douglass and Judith Stephens.

Visitation will be held on Monday, May 16, 2022 from 5-8 p.m. at Campbell-Plumly-Milburn Funeral Home, 319 N. Chestnut Street Barnesville, Ohio.  The service will be held on Tuesday, May 17, 2022 at 11 a.m. with Dr. Brian Bee officiating.  Burial will follow in Friends Cemetery in Quaker City.

Memorial contributions may be made in Bill’s name to Palliative Care of Southeastern Med.