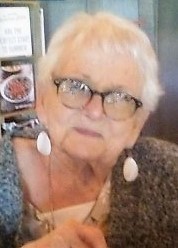 Sharon J. McElfresh, age 88, of Marietta, Ohio, died Wednesday, May 25, 2022, at Marietta Memorial Hospital. She was born April 5, 1934, in West Chester, Pennsylvania, daughter of the late Frank and Florence Frances Secor Sedwick. Sharon was a graduate of Shaw High School in Cleveland and attended  secretarial and business colleges in Cleveland. She was employed as secretary to the Dean of Students at Case Western Reserve University in Cleveland, and she did bookkeeping and secretarial work most of her life. She was Baptist by faith. Sharon was a child model who appeared in parades for Halle’s and Higbees Department Stores in Cleveland, and also for dairies and heating companies in northern Ohio. She enjoyed sewing and home decorating, and she was devoted to her family, especially her husband.

In addition to her parents, she is preceded in death by her husband, Jack Leroy McElfresh, Sr., whom she married May 4, 1951, and who died October 20, 1998; one daughter, Jenny Lynn Ruppel; one son, Jack L McElfresh, Jr.; an infant grandson, Leonard Andrew Clark; and a special friend, Santo Stumpo.

Surviving are her children, Barbara Jean (Rick) Saari of Ashtabula, Sharon S. Clark of Marietta, and Daniel T. McElfresh of Chillicothe; 12 grandchildren, including Thomas Card of Bismark, Illinois; several great-grandchildren; and one great-great-grandchild.

Friends may call Saturday, June 4, 2022, from 11 a.m.-12:30 p.m. at McVay-Perkins Funeral Home, 416 East Street, Caldwell. A graveside service will follow at Sharon Cemetery at 1 p.m. In lieu of flowers, memorial contributions may be made to a charity of one’s choice. An online guestbook may be signed at www.mcvay-perkins.com