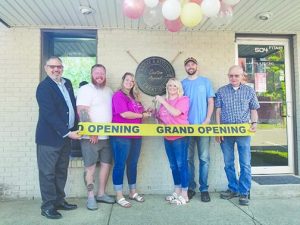 Above & Beyond Creations in Caldwell recently celebrated their grand opening with a Noble County Chamber of Commerce Ribbon Cutting.

Ciera Archer and Amanda Clark have opened a shop at 504 Cumberland St. in Caldwell specializing in bringing people’s ideas to life on custom shirts. Ciera is a lifelong resident of Noble County, and a graduate of Shenandoah High School. The daughter of Greg and Barb Clark, she married her husband, Corey, in September, 2019 and they have five children.

Her business partner, Amanda, who is Ciera’s sister-in-law, graduated from Coshocton High School in 2007. She is the daughter of Shelia Reger and the late Jeff Mobley. She married her husband, Tyler, in 2017. They have a daughter, Emma.

“Amanda and I were both stay-at-home moms, and we really wanted to be more involved with the community.”

The two discussed possibilities for businesses. They loved the former Sun Parlor, a tanning salon that also printed shirts in Caldwell, and decided to do something similar.

“We wanted to do custom shirts, but stay away from screen printing and vinyl, so we purchased a DTG machine that directly prints into the garment for a longer-lasting print. We love bringing people’s ideas to life!”

They named their business Above and Beyond as a tribute to Ciera’s grandfather, who owned and operated two businesses in Cambridge; Jeans Up, and an arcade which also printed and sold tee shirts, and was called Above and Beyond. The first employee of that Above and Beyond was Robert Watson, who later became a Noble County Prosecutor.

“So here we are,” Ciera said, “46 years have passed and several generations later, and we are bringing the name back to life . . . we promise to go above and beyond for each and every one of our customers, just like Grandpa did.”