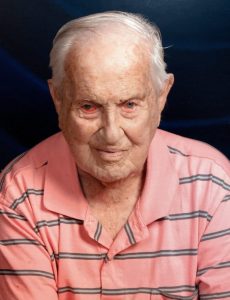 Richard “Dick” A. Davis age 101 of Caldwell, Ohio passed away Wednesday, June 8, 2022 at the Altercare Summit Acres Skilled Nursing & Rehab in Caldwell, under the care of Absolute Hospice. He was born January 16, 1921 in Caldwell, Ohio, a son of the late Willard and Lena Haga Davis.

He served and protected his nation in the U.S. Army Air Corps for three years during WWII, stationed in Nome, AK. He was a member of the Caldwell United Methodist Church; having lived behind the parsonage he and Vivian were able to get to know several ministers very fondly over the years. He was an avid baseball player and went on to coach little league for many years. Dick also had a love for hunting and raising hunting dogs. He retired in 1985 from the former Imperial Clevite Corp in Caldwell. He eventually moved into a coffee drinking and “supervisory” role at Chandler Funeral Home.

In addition to his parents, he is preceded in death by his wife Vivian M. Davis whom he married August 10, 1946 and who passed away November 1, 2006; three brothers, Virgil, Bob, & Grant Davis; one sister, Mary Catherine Davis; niece Sue Ellen Davis and nephew Tom Davis.

The family will receive friends for visitation Sunday, June 12, 2022 from 1:00 to 4:00 p.m. at the Chandler Funeral Home, 609 West Street, Caldwell, OH 43724. A funeral service will be held Monday, June 13, 2022 at 11:00 a.m. in the Chandler Funeral Home Chapel, with David Cater and Rev. Larry Hukill officiating. He will be laid to rest next to his wife Vivian in Olive Cemetery with Military Graveside Services conducted by the Noble County Veteran Service Organizations. Memorial donations may be directed in Dick’s honor to the Caldwell United Methodist Church, 537 Main Street, Caldwell, Ohio 43724. Please join us in remembering Dick by visiting his memorial at www.ChandlerFuneralHome.net.