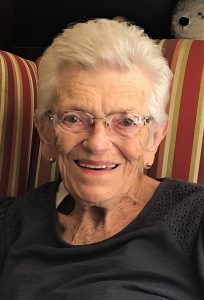 Janet L. Watson age 86, of Chandlersville, Ohio passed away Monday, July 25, 2022 at The Oaks at Northpointe in Zanesville, Ohio. She was born July 1, 1936 in Noble County, Ohio, a daughter of the late Glenn T. and Sara Hendershot King.

She was a member of the Cumberland United Methodist Church and formerly the Bells United Methodist Church. She was the valedictorian of the 1954 Graduating Class of Caldwell High School. Janet enjoyed sewing, quilting, traveling, and working crossword puzzles. She could often be found playing UNO or Old Maid with her grandchildren.

In addition to her parents, she is preceded in death by her husband Dana L. Watson whom she married September 13, 1958 and who passed away October 22, 2013; brother and sister-in-law George F. and Kittie King; son-in-law Dennis Watson, and stepmother Ruby Ellison Boyd King.

The family will receive friends for visitation Saturday, July 30, 2022 from 11:00 a.m. to 1:00 p.m. at the Cumberland United Methodist Church, 441 West Main St, Cumberland, OH 43732. A funeral service will conclude visitation at 1:00 p.m. in the Church with Rev. Keith Taylor officiating. Burial will follow in the Cumberland Cemetery, where she will be laid to rest next to her husband.

Memorial contributions may be directed to the Cumberland United Methodist Church or the Cumberland Volunteer Fire Department, PO Box #201, Belle Valley, OH 43717. Chandler Funeral Home, 609 West Street, Caldwell, OH 43724 has been entrusted to care for the family. Please join us in remembering Janet by visiting her memorial at www.ChandlerFuneralHome.net