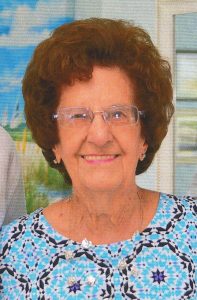 Norma primarily stayed at home to care for her husband and children, but always had such a strong work ethic, so she did have several part-time jobs throughout her life. One of the first jobs she had after moving to Massillon was Morton’s Hallmark Store.

But most probably knew Norma through her role at her daughter’s flower shop, All Occasions.

Norma was the matriarch of her family and her children will always admire her for her devotion to her family as well as her strong-will and independent qualities.

In addition to her parents, Norma was preceded in death by her beloved husband of 49 years, Robert Augenstein, her twin brother Norris and her brothers Vernon and Dale Smith.

The family will receive friends on Friday, August 12 from 5-7 p.m. at the Paquelet Funeral Home in Massillon.

Friends may call Saturday, August 13 from 12 p.m. – 2 p.m. at McVay-Perkins Funeral Home, 416 East Street, Caldwell, where the funeral service will follow visitation at 2 p.m. Burial will follow at Crooked Tree Cemetery. An online guestbook may be signed at www.mcvay-perkins.com