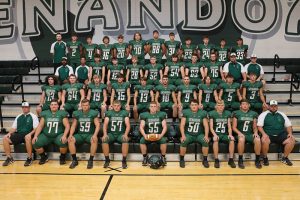 For The Journal
Last season was a bit of an uncharacteristic one in Noble County.
The Shenandoah Zeps finished 2-7, missing the postseason for the first time since 2018. Gone from that team are five players to graduation and a 1,000 yard back who transferred.
Taking all of that into account, second-year head coach Johnny Jones knows there is nowhere to go but up.
“We have high expectations,” stated Jones. “We started the off-season lifting program right away as soon as the season ended and Jesse Wells did a great job as the weight room coordinator throughout the day and it really changed these kids’ bodies. We had a great off-season and had about 80 different lifts. These kids are dedicated and love being in the weight room.
“We have had a lot of selfless moves take place,” Jones continued. “We had a senior quarterback who played some two years ago under Wells and started nine games last year and a freshman came in and took the quarterback position, and that senior moved to center. You don’t see that every day in football, but that is the type of team we are dealing with. They are unselfish and want to do whatever it takes to win.
Shenandoah will be running a spread offense this season, meaning the aforementioned quarterback position holds the key to making the offense go. Winning that position is freshman Braxton Barnett (6-0, 165).
“Braxton does a great job,” noted Jones. “It’s a lot of verbiage coming from Coach (Josh) Lowery. He has really taken Braxton under his wing and has spent a lot of individual time with him. He’s done a great job handling it and is a mature kid at the age of 14 and we are glad to have him.”
Senior Nathan Van Fleet (6-1, 238), was the player who made the selfless move to center, but he unfortunately suffered a torn ACL and will be out for the season. HE was special mention all-Eastern District last season at QB. Freshman Ethan Cutlip (5-9, 152) is now backing up Barnett at QB.
A pair of backs figure to carry the load in the backfield for the Zeps as juniors Sam Townsend (5-11, 184) and Jacob Feldner (5-8, 180) will split the majority of snaps. Classmate Brenden Portman (5-9, 163) could also see time in the backfield.
Also seeking carries will be sophomore Landon Lively and frosh runners Tate Devolld (5-7, 158) and Ayden McPeek (5-7, 166).
Senior Joel Rataiczak (6-4, 220) will lead the receiving corps, lining up at wide receiver and tight end.
“Joel is a huge target at 6-4 as a tight end or slot receiver,” said Jones. “We love having him split out and lock and outside linebacker, we feel it is a mismatch in our favor.”:
Juniors Weston Miley (6-3, 171), Portman, and Hunter Yates (6-0, 170) fill out the starting receiving corps as the Zeps figure to regularly send out multiple-receiver sets. Yates received honorable mention all-Ohio and first team all-Eastern District honors last fall.
Juniors Colt Wheeler (6-2, 166) and Kayden Palmer (6-0, 195) also will be looking for catches, with Palmer potentially lining up at receiver or tight end.
Senior James Freeman (6-2, 175), junior Tristen Rossiter (5-6, 135), sophomores Quinton Gadd (6-3, 170) and Wesley Hunter (5-9, 125) and freshmen Grady Mazgay (5-8, 120), Hunter House (5-10, 155), Hunter Rossiter (6-1, 140), Cole VanFossen (5-5, 125), Caden VanFossen (5-5, 125) and Korbin Varhola (6-3, 198) round out the receivers.
Jones recognizes the offensive line as the strength of the team, as the Zeps will have three seniors lining up in the trenches.
Junior Jared Trenner (5-9, 210, honorable mention all-Ohio, first team all-Eastern District, all-OVAC, all-MVL) will transition to center from left guard due to the loss of Van Fleet, and Hunter Schott (6-3, 248) fills the right tackle spot. Junior Jace Anderson (5-11,244), who started all nine games last season, will be the right guard; sophomore Dalton McElroy (6-1, 244) will be the left tackle and sophomore Drew Wildroudt (6-1, 285) will be at left tackle. Also working for time on the line are senior Jacob Crum (6-0, 257), juniors Axle Sailing (5-10, 333) and Gage Glidden (6-1, 215), sophomores Logan Clark (5-11, 195), and Nash Noll (6-2, 215), as well as freshman Cayden Rucker (6-2, 248).
On special teams, Schott will be the punter, Miley will handle kickoff duties, Wildrout will handle point-after attempts and Rataiczak will be the long snapper.
Defensively, Shenandoah runs a 4-4 base and returns a lot of talent along the line. Leading the way are defensive ends Schott (honorable mention all-Ohio, first team all-Eastern District, all-OVAC, all-MOVL) and Rataiczak (honorable mention all-Ohio, first team all-Eastern District, and all-OVAC). Rotating in at defensive tackle will be senior and Devan Weisend (6-1, 360), McElroy, Wildrout and Anderson.
Trenner fills the “Mike” linebacker spot while Palmer and Clark are competing for time at “Will” linebacker. Fender is in the “Sam” ‘backer spot, and Townsend starts at the “Bandit” position, where he garnered honorable mention all-Ohio along with first team all-Eastern District and all-MOVL All-District honors last season.
The defensive backfield sees Portman, Miley and Tristen Rossiter rotating in at corner and Yates at safety, where he was an All-District performer. Wheeler and some others will also be seeking time in the secondary.
Assisting Jones are Josh Lowery (Offensive Coordinator, QB coach), Jan Mazgay (WR/DB coach), Dustin Hughes (WR/LB coach), Todd Morrison (OL/DL coach), David Freeman (DB/RB coach), Patrick Gerst (DL/OL coach), Craig Wehr (LB/OL coach) David Connolly (DB/WB coach) and Jayden Porter (DB/RB coach, equipment coordinator).
“We went from three or four assistant coaches last season to nearly 10 this year and it has lifted a big weight off of my shoulders and allowed me to delegate,” Jones noted. “Lowery has done a great job taking the offense under his wing, and I can just let him do his thing, and I can check out and run the defense. It is a really good rapport we have.”
Those two worked together, as Jones was the defensive coordinator under Lowery when he coached at Cambridge.
The Zeps open the seasons tonight hosting Newcomerstown.
Posted in Breaking News, News, Sports