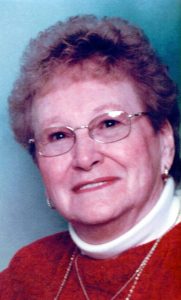 She was born at Piedmont, Ohio on September 13, 1936, a daughter of the late Raymond D. Ferguson and Bessie Myrtle Rankin Ferguson.

She was a homemaker and was a member of the Quaker City Southern Baptist Church, Quaker City, Ohio.

She enjoyed quilting, going to church, singing, reading, traveling and spending time with her family.

In addition to her parents she was preceded in death by her loving husband, Lewis Morris on July 15, 2011; three sisters, Louise Harding, Betty McMillan and Helen Carpenter; one brother, Floyd Ferguson; a grandson, Brandon Moore and great-granddaughter, Makayla Stottsberry.

Burial will follow in the Eastern Cemetery, Summerfield, Ohio.