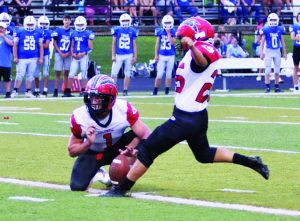 The Caldwell High  football team opened their season on Saturday, taking on Buckeye Trail at Meadowbrook, with the Redskins earning a 17-6 victory.

Caldwell Head Coach Chance Rucker was pleased with his team’s performance. “We came out and had a few faults, but we bounced back and finished strong,” he said. “We had a standout defense performance and I couldn’t be happier. “Defensively we played great because we didn’t allow hardly any total offense,” Rucker continued. “Offensively, we just have to clean some things up and we will be a really good team.”

The Warriors started the game by recovering an onside kickoff at the 46-yard line. From there, it took Trail nine plays to drive 46 yards for a touchdown. Koen Eagon scampered 14 yards for the score, and although the two-point conversion attempt failed, the Warriors led 6-0 with 5:42 left in the first quarter.

Caldwell moved the ball well on its first drive, starting with a 39-yard pass from junior quarterback Cale Bender to Alex Herlan. Buckeye Trail forced a fumble to end the drive, recovering the ball at the four-yard line.

The Warriors moved the ball down the field on their second drive, but freshman linebacker Gavin Leake intercepted a Nick Neuhart pass on the 25-yard line.

The Redskins could not move the ball and junior kicker Paisley Sidwell came in and nailed a 30-yard field goal to cut the lead to 6-3 with 8:52 left in the half.

Eagon took the ensuing kickoff 53 yards to the 32 and a horse collar penalty gave the Warriors first-and-10 at the 19.

Senior linebacker Tyce DeVolld ended the Warriors’ drive with a sack of Neuhart on fourth-and-12 from the 21.

The Redskins found the end zone on their next drive, moving the ball 68 yards in 12 plays before Bender ran the ball across the goal line from eight yards out. The big plays of the drive were a 12-yard Bender pass to senior running back Marshal Sayre and a Sayre run of 17 yards. Sidwell hit the point-after kick and Caldwell led, 10-6, with 1:20 left in the second quarter.

The second half include a nearly three-hour rain delay, with play resuming at 11:26 p.m., and neither team scored until Caldwell put together an eight-play, 55-yard drive.

Bender had the big play, running the ball into the end zone from the 37 for his second touchdown of the game. Sidwell hit the PAT kick and the Redskins led. 17-6. with just over a minute remaining.

Caldwell ran the ball 26 times for 174 yards. Sayre had 11 carries for 111 yards and Bender had eight for 59 yards and two touchdowns. Bender was 2-of-7 for 51 yards, completing a 39-yard pass to Herlan and a 12 yarder to Sayre. Bender and Leake had interceptions. 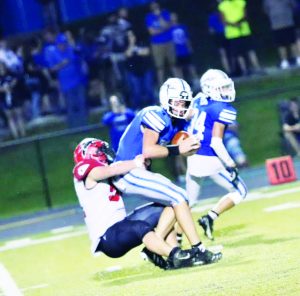 The Warriors’ Neuhart was 2-of-5 passing for 12 yards and threw two interceptions. Charlie Perry caught both passes. Perry ran the ball nine times for 49 yards and Donovan Geiger had two big kick returns for 52 yards.

“We will get back to practice and iron out our minor issues and we should be ready to roll in our home opener next week,” said Rucker. “All in all, I’m very proud of these guys and they are going to be the team to beat.”

The Redskins play Steubenville Catholic Central in their home opener on Friday. Kickoff is scheduled for 7 p.m.