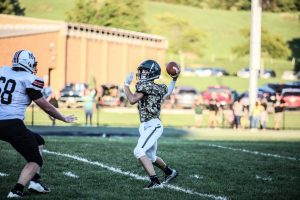 It was a record-setting debut for SHS freshman quarterback Braxton Barnett, who passed for 322 yards and five TDs in the Zeps’ 48-8 win over Newcomerstown. Photo by Holly Dixon

There’s generally a lot of trepidation when the reins of a football team are handed over to a freshman.

Shenandoah High’s Braxton Barnett put those concerns to rest in a hurry, debuting with a school record-setting 18-of-23 effort for 322 yards and five touchdowns while adding 63 yards and a score on the ground to spark the Zeps to a 48-8 rout of visiting Newcomerstown on Military Appreciation Night in Sarahsville.

Needless to say, the play of the 6-0, 165-pound Barnett – who surpassed the previous SHS mark of 283 yards by Boone Jones in 2018 – impressed second-year SHS coach Johnny Jones.

“Now that we have a quarterback who can run, that opens up a whole different dimension for us,” he said. “He spun it really well and our receivers played well. Braxton puts in a lot of extra time with Coach (Josh) Lowery, and that’s evidence of it tonight.

“We’ve got enough weapons that the defense can’t key on one guy and we want to continue to disperse the ball like that going forward,” Jones added.

The Zeps racked up 468 of their 554 total yards in the first and were pretty much on cruise control during the second half with a running clock most of the way.

Junior Brenden Portman led the receiving corps with six catches for 158 yards and three TDs while junior Hunter Yates was credited with seven grabs for 63 yards and a TD. Junior Weston Miley caught three balls for 47 yards plus a pair of two-point conversions and senior Joel Rataiczak added two catches for 54 yards and a score.

Defensively, the Zeps limited the Trojans to a net of 121 total yards.

Newcomerstown managed 76 yards on the ground on 42 attempts and 45 through the air as 4-of-6 passes hit the mark. 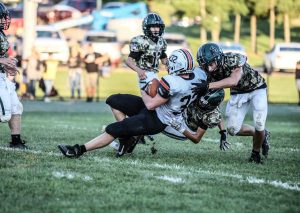 “We try to be suffocating (on defense) and try to make teams one-dimensional and do things they’re not comfortable with,” said Coach Jones. “We stacked the box tonight and shut them down pretty well.”

Shenandoah drove to a first-and-goal at the one-yard line with its opening possession, but a fumble thwarted the scoring bid.

On the next series, Newcomerstown sophomore Bunk Millender intercepted a Barnett pass and scampered 80 yards for a “pick-six” and senior Hunter Amore ran for the two-point conversion to put the Trojans on top, 8-0, at the 9:57 mark of the first quarter.

The Zeps countered in a hurry, with Barnett finding Rataiczak wide-open behind the Newcomerstown secondary for a 45-yard touchdown.

The two-point try was stopped short, leaving the Zeps on the short end of an 8-6 score with 5:49 remaining in the opening round.

Newcomerstown tried a fake punt on its next series, but the Zeps smelled it out and took over on the Trojans’ 33.

On the first snap, Barnett turned an option keeper into a 33-yard TD. Again, the PAT run was stopped but the Zeps were on top, 12-8, at the 2:42 mark of the first period.

Shenandoah tallied three times in the second period to break the game open.

The two-point attempt failed following the first score, but Barnett found Miley for the bonus markers after the second to boost the lead to 26-8.

The final TD of the half – set up by a 65-yard run from Townsend – covered 21 yards on a pass from Barnett to Yates with 2:57 left before intermission to widen the gap to 32-8.

The Zeps almost added another TD in the waning moments, as Barnett completed 6-of-7 passes but time ran out on the final completion at the five-yard line.

Two more TDs in the first six-plus minutes of the third period closed out the scoring, with Barnett capping his day with a 21-yard scoring pass to Portman at the 9:02 left in the quarter and Jacob Feldner adding the two-point run for a 40-8 lead.

Finally, Feldner ran for a 20-yard TD, with Barnett hitting Miley for another two-point conversion and a 40-point lead with 5:54 remaining in chapter three.

“We got seven or eight sophomores a lot of playing time both ways last year,” he related, “and not only did they grow, but the game has slowed down for them.

“We missed a few blocks, but we’ll clean that up,” Jones added. “I was happy with our overall effort.”

Prior to the game, “Mr. Zep” Gene Davis was presented with a Military Appreciation Award by the Army National Guard and he received a standing ovation from the many grateful members of Zep Nation.

The Zeps travel to Shadyside on Friday, with kickoff at Fleming Field set for 7 p.m.