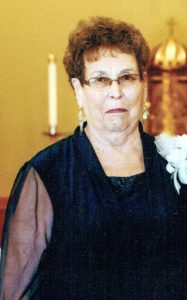 She was born at Zanesville, Ohio on March 8, 1938 a daughter of the late Clemence “Tip” Dimmerling and Marie Agnes Hill Dimmerling.

She enjoyed gardening, crossword puzzles, baking, going to bingo and spending time with her family especially with her grandchildren.

In addition to her parents, she was preceded in death by her husband, Robert “Bob” Gaydosik and a brother, Donald Dimmerling.

Mass of Christian Burial will be celebrated at 11:00 a.m. Wednesday, August 31, 2022 at St. Michael Catholic Church, Carlisle, Ohio with Bishop Jeffrey Monforte as the celebrant.

Vigil services will be held at 7:45 p.m. Tuesday at the funeral Home.