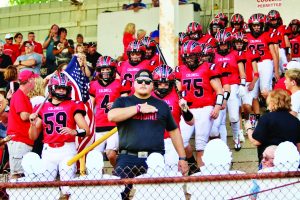 Coach Chance Rucker leads the Redskins in through the stands and onto the field prior to kickoff of the Redskins’ game against Steubenville Catholic at the Noble County Fairgrounds last week. The Redskins improved to 2-0 with a 48-0 victory. Photo Credit Melinda Sayre.

The Caldwell Redskins hosted Steubenville Catholic Central in their home opener on Friday, dominating the Crusader with a 48-0 victory.

“This was the first shutout of my career,” said Caldwell Head Coach Chance Rucker. “I could not be prouder of the guys. They played hard the entire four quarters. We just came out and played. Offensively we have to clean some stuff up because we had some blunders.

“All in all, I am super proud of the defense,” he continued. “They really went after it tonight. 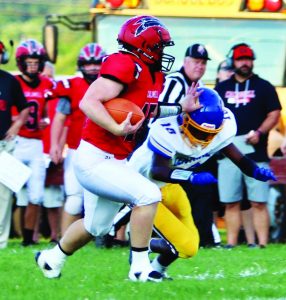 Caldwell senior Marshal Sayre took the handoff on the opening play of the game and rambled 65 yards for a touchdown. Paisley Sidwell added the extra-point kick and the Redskins led 7-0 with 11:41 left in the first quarter.

After the defense forced a four-and-out, the ‘Skins took over on the 49-yard line and it took just five plays to for junior quarterback Cale Bender to get a touchdown on a 12-yard run.

Bender completed a 12-yard pass to Braxton Dudley and Tyce DeVolld had a 14-yard run to highlight the drive. Sidwell again hit the point-after kick and Caldwell led, 14-0, with 7:27 left in the first. 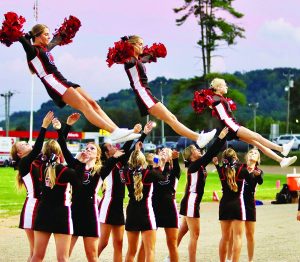 An interception by Sayre ended the next Crusader drive and Caldwell took over on the 41.

Bender hit Dudley for a 36-yard strike to start the five-play touchdown drive. Dylan Wheeler ran the ball in from six yards out for the score and Sidwell nailed the bonus kick as the Redskins led 21-0 with 3:43 left in the opening quarter.

Caldwell took 12 plays to travel 62 yards on its next possession, with Sayre getting his second TD of the night on a two-yard run. Bender hit Dudley with a 37-yard pass during the drive. Sidwell’s kick was good, and the Redskins led 28-0 with 9:39 left in the half.

The Redskins scored again just before the intermission on a nine-play, 45-yard drive. Bender scored on a two-yard keeper and Sidwell again made the point-after kick, boosting Caldwell’s lead to 35-0 with 47 seconds left in the half.

Caldwell’ next tally came on a six-play, 61-yard drive when Sayre ran it in from five yards out. The big play of the drive was a 54-yard strike from Bender to Ethan Crock. The extra-point kick was no good this time, but the ‘Skins led 41-0 with 5:14 left in the third quarter.

Caldwell closed out the scoring on another one-play series, this time with DeVolld taking it 65 yards to the end zone. Sidwell made the PAT and the Redskins led 48-0 with 1:45 left in the third period. 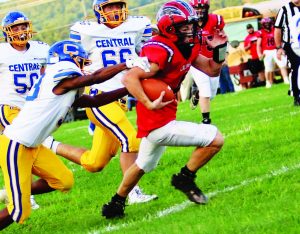 Bender completed 8-of-12 passes for 172 yards. Dudley was the leading receiver with three catches for 85 yards. Crock caught three for 65 yards. Wheeler caught one pass for 14 yards and Herlan grabbed one for eight yards.

Defensively, Caldwell had two takeaways – an interception by Sayre and a fumble recovery by Wheeler.

“We just have to keep moving forward,” said Coach Rucker. “We just need to stick to our game plan. Iron sharpens iron. We have to get back to the drawing board and get back to it in practice this week.”