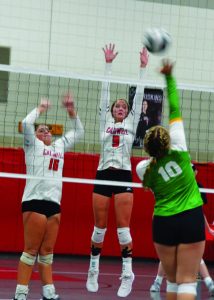 “We played flat in the last two sets,” said Caldwell head coach Alexis Watson. “We had to wait on them to arrive and that really affected us. I was impressed with how strong we started, however. We were doing everything that we have been working on in practice, just perfecting it.

“The freshmen have been playing strong,’ she continued. “They have had a few mental blocks, but for our team being so young, I thought we have done really well handling the pressure.

“Losing the fourth set was not totally a bad thing,” Watson added, “because it gave our girls a little bit of pressure. Our goal is to win the sectional and district, so this was good practice for that.”

The Lady Redskins dominated the first set, leading the entire time and winning, 25-10.

Conotton Valley took an early lead in the second set before Caldwell tied it at 4-4 on a Josie Lori kill. CHS took the lead on a Gwyn Lori kill and built a four-point lead before the Lady Rockets tied the game at 12-all. Gwyn Lori gave the Redskins the lead on back-to-back aces and Caldwell never looked back and took the set, 25-21.

The Lady Rocket scored the first five points of the third set behind the serving of Lilah Williams. They led by as many as seven and won the se,t 25-17.

The fourth set was tight throughout with Caldwell building a seven-point lead before Conotton Valley battled back to tie the game at 23-23. From there, several Rocket errors gave the Redskins a 26-24 win to finish off the match..

Freshman setter Sophia Marshal led the team with 38 assists. Gwyn Lori had 16 kills and four aces while Chesne Long had 15 kills and five blocks. Lanie Fry had 12 digs and Lyla Lowe and Shelby Pakes each had four blocks.

The Lady Redskins traveled to Zanesville to take on Bishop Rosecrans on Thursday, getting their second win of the week in three sets, 25-5, 25-15 and 25-11.

Gwyn Lori led Caldwell with eight kills while Josie Lori had six aces. Freshman Sophia Marshall had 16 assists while Fry and Long each had six digs.

The Lady Redskins (2-0) travel to Shenandoah on Monday and host Linsly on Wednesday.