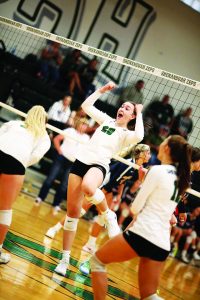 After opening the season with a loss to Union Local, Shenandoah got things rolling with three victories during the last week. The Lady Zeps upended Cambridge, Buckeye Local and Fort Frye in a four-day span to improve to 3-1 on the young season.

“We had a rough start in set one,” said Coach Megan Grywalski. “Our reception passing struggled and hitting errors caused the game to be closer than it should have been.

“In set two, we came out with a strong lead, we were more aggressive serving and had stronger blocking that led to easier wins,” she added. 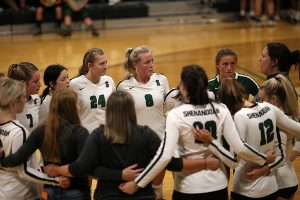 Mya Leach and Klara Anderson both collected nine kills while Charli Wickham and Brenna Leach both had six and Brylee May had four. Heather Merry handed out 15 assists and Mya Leach had a dozen.
Mya Leach was 14-of-14 serving; Heather Merry was 15-of-16 with one ace; and MaKenna Clift was 16-of-17 with two aces. Wikander notched 17 digs; Leach had 13 and Clift had 11.Anderson recorded five blocks
In the JV match, Shenandoah also scored a sweep by 25-17, 25-xx scores.
For the Zeps, Karis McKee had five kills and four assists; Layken Lively had 10 assists; Alyssa Crum had five aces; and Eliza Carpenter had six digs.
***
Next up, Shenandoah swept past visiting Buckeye Local by 25-5, 25-14 and 25-6 scores.

“We looked great tonight and played as a team,” said Grywalski. “All 11 players contributed and filled their roles exactly as expected to get this win.”

My Leach pounded 13 kills to lead the Zeps’ play at the net while May had seven, Emmy McVicker had six, Brenna Leach had five and Anderson had four. Heather Merry was charted with 20 assists and Mya Leach had 11.

Abby Van Fleet collected five kills and Ella Binkiewicz had four; McKee had six assists and three aces; and Carpenter had 11 digs for the Zeps.

“We blew big leads too easily and were forced to go to five sets because of it,” said Coach Grywalski. “We lost momentum in sets two and three once we met the 20-point mark, but in set five, we came out playing to win.

“By the time we had a 10-1 lead, Fort Frye had already used both timeouts,” she added. “All of our players have filled their roles and it has been showing in this week’s wins.”

Mya Leach was in top form with 21 kills, 16 assists and 13 digs to lead the way. Anderson recorded 11 kills and six blocks while McVicker had nine kill and Brenna Leach chipped in six.

Merry was charted with a team-high 28 assists to go with nine digs. Noll contributed seven dig while Wikander and Clift each had six.