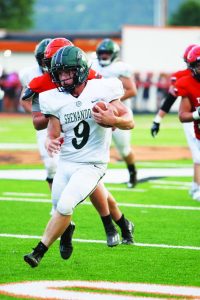 The Shenandoah Zeps are 2-0.

Freshman quarterback Braxton Barnett fired four touchdown passes, three to junior Hunter Yates, and junior Jacob Feldner rushed for 146 yards and a score as the Zeps cruised to a cherished 38-20 victory over Shadyside on the turf at Fleming Field.

The victory was the first for Coach Josh Lowery, who took over the program in the middle of the week.

“This is a huge win for us,” said Lowery. “As far as I am being told, this is our first-ever victory over Shadyside (in football) so I am very happy for the kids and the community. They really have a reason to celebrate.

“I have preached all week that yes, we have faced some adversity,” Lowery added, “but it is just a game and if the kids go out and fight through it, everything will be alright and they did just that.”

Both teams had trouble mustering offense early, so the Zeps got things going on defense when a tipped pass from Shadyside junior quarterback Ben Wach ended up in the hands of junior Tristen Rossiter, giving the visitors a first down at the enemy 18.

A nine-yard burst on first down followed by a pair of sacks had Shenandoah facing a fourth-and-16 from the 24, however, a roughing the passer penalty gave the Zeps a fresh set of downs.

On the very next play, Barnett hit Yates for a 12-yard score at 9:41 of the second. The pass for the two-point conversion failed, but the visitors were on the board with a 6-0 lead.

Shadyside’s third three-and-out of the half put the Zeps back in business at their 42.

After converting a third-and-14 six plays into the drive, it was Barnett to Yates once again, this time on a leaping grab over the middle from 23 yards out at 5:30 for the touchdown. Weston Miley hauled in the two-point pass from Barnett for a 14-0 reading. 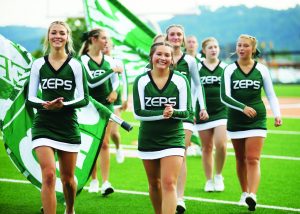 The Tigers recovered a fumble near midfield a short time later, but another penalty pushed them into a fourth-and-19 situation before turning the ball over on downs.

From there, Shenandoah went on an eight-play, 54-yard march for the final score of the half – a  nine-yard hookup from Barnett to junior Brendon Portman followed by Jacob Feldner running in the two-point try for a 22-0 advantage at the break.

Shadyside coach Mike Kernik’s crew managed just 69 yards of offense in the first half while allowing 189 to the Zeps.

While the Tigers – who were once again their own worst enemies with nine penalties for 100 yards – fought hard in the second half, it wasn’t enough after the sluggish first two periods.

Shenandoah pushed the margin to 30-0 at 8:13 of the third with a two-play, 48-yard series with Barnett hitting Yates for his third score from 20 yards out and Feldner adding the bonus markers.

Shadyside finally got on the board after sophomore Cole Micker returned the ensuing kickoff 69 yards to the Zeps’ 12 where Wach connected with senior Elijah Brock for the first of their three touchdown strikes on the very next play at 7:21. The kick was blocked and the score stood at 32-6.

Wach found Brock for scoring strikes of eight and 16 yards in the fourth quarter, with a two-point pass between the duo capping the scoring late.

“Early penalties hurt us, but like I said last week, I really need to get things cleaned up,” said Shadyside’s Kernik. “I felt like we were more focused at practice this week and paid more attention and things got a little better in the end (Friday).

“These kids never give up,” he continued. “They didn’t against Ferry and they came out and played hard in the second half (Friday). Give Shenandoah all the credit because they played a great game and their kids really wanted it. I am just happy at how we fought, and I believe we will continue to build on this and get better every week.”

Shenandoah finished with 322 total yards of offense – 185 through the air and 137 on the ground, while limiting the Tigers to just 32 yards on the ground and 230 total. Wach did throw for 198 yards and three scores (25-of-39), but was intercepted twice.

“We really want to live by the run and control the clock,” said Shenandoah’s Lowery, “but Braxton (Barnett) did a great job again (11-of-14 for 161 yards). He is a very special, raw, talent and it is scary what he could become.

“This was a great win and hopefully we can keep this going,” he added.

Barnett’s top targets were Yates with six catches for 97 yards and Miley with four grabs for 55 stripes.

The Zeps return home Friday to take on Waterford on Hall of Fame Night, with kickoff set for 7 p.m.